Yesterday I had my longest run since the last 2 weeks - a 30-minute jog on the football pitch at Kampung Pandan track. I was so glad to jog with the usual gang like Ronnie, Adam, Danny and Justin while they were warming up for their speed work-out.

My tendon didn't hurt much after the run. What a relief! I started to have this crazy idea to participate in this Sunday's Ipoh Half Marathon.

After that I just stayed back to watch those guys suffering from suffocating in their work-out!
Posted by John at 8:30 am 3 comments:

Start All Over Again

After staying out from running completely for 10 days, I felt so restless, heavier and at times, down. Life without running is so bored for me!

Needless to say, I excitedly woke up this morning for a short run. When I mean short, it is really short - 500 metres! I started out with some stretching then walked slowly on the concrete track. I started to run - very slowly upon reaching the synthetic track.

Even though it was only 500 metres, I think it's a good start as I didn't feel any pain at the tendon area. I will increase it to 1km tomorrow, hopefully.

Meanwhile, I would like to thank once again to all the well wishers for their moral support. Without them, I might not have recovered so soon. Thanks, pals!
Posted by John at 4:40 am 5 comments:

My Story On 4x3km Relay Run As A Spectator 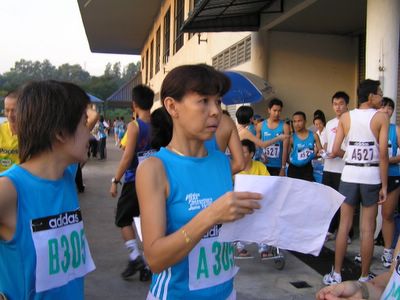 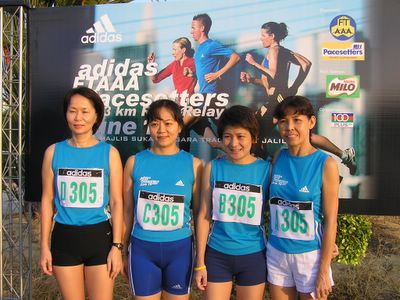 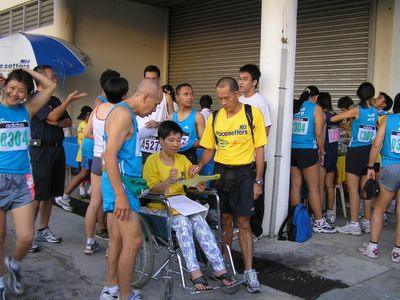 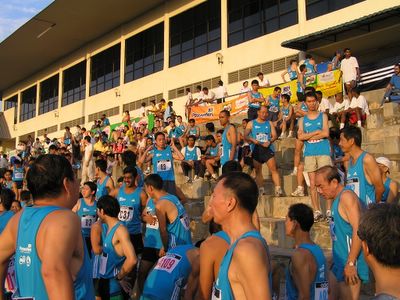 Mr Cool about to start the race... 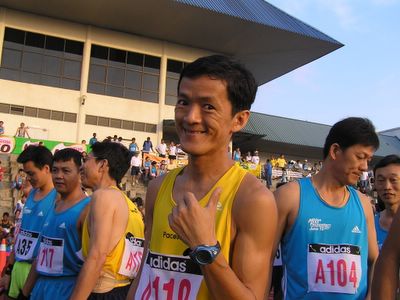 All soldiers...marching to the starting block. 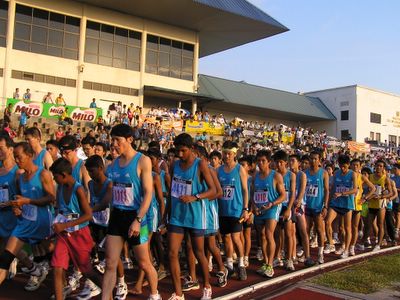 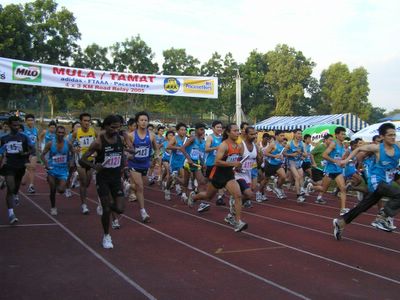 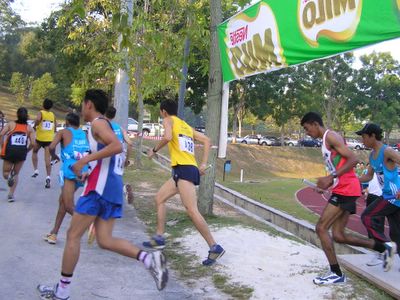 So "kan cheong"...but still pause for a photo. 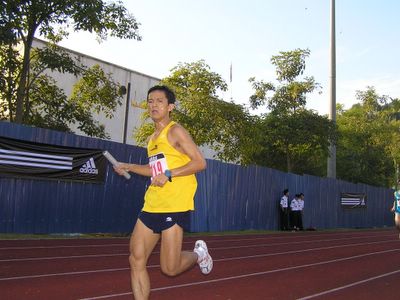 On the way to make a historic win... 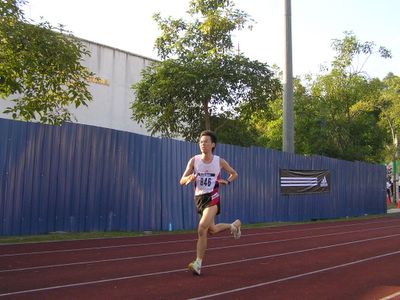 Make way my fever and sore throat...I beat you! 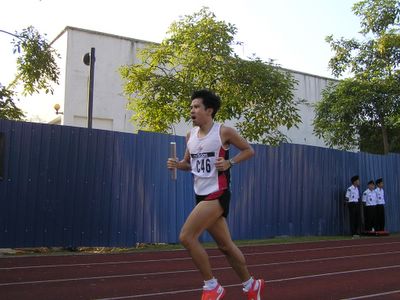 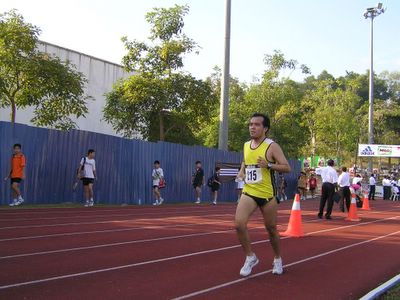 The waiting is over. Yuppie, I can run now. 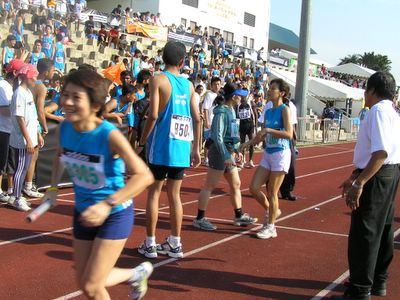 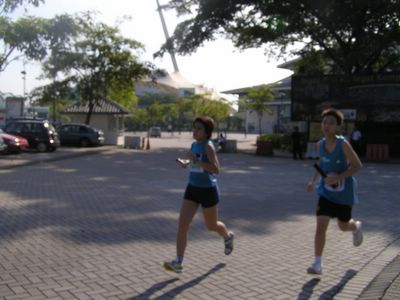 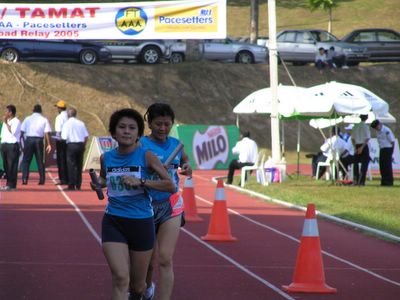 Believe me. I can take on younger runners. 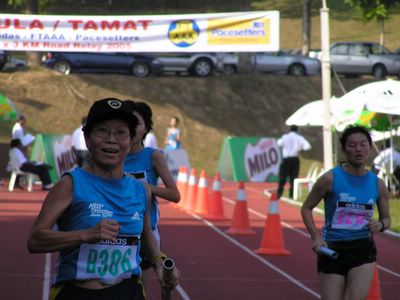 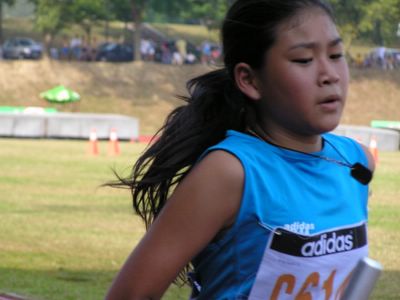 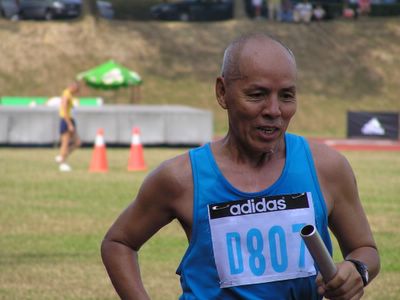 Flo Jo in the making? 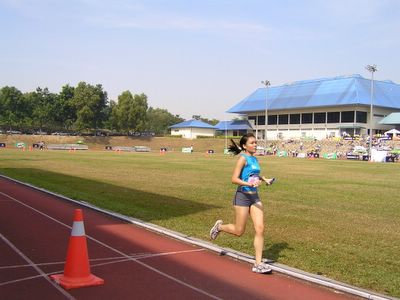 Here's our gifts for you, daddy - "Happy Father's Day". 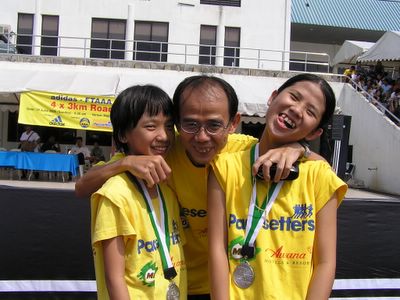 A happy ending. See you next year. 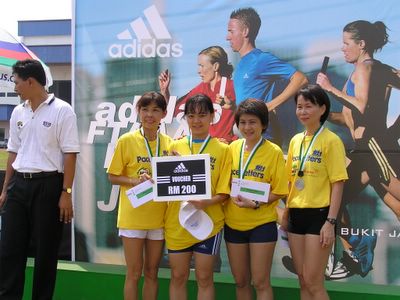 We had a good time at Majlis Sukan Negara track, Bukit Jalil, watching all the top runners in action this morning.

I managed to capture some exciting moments. To view the photos, please click here.
Posted by John at 8:30 am 1 comment:

Last Sunday, after the long run to Hartamas, I suddenly felt a sharp pain near my right heel. I could feel the discomfort even as I walked. Obviously, my worst enemy - achilles tendon injury has come back and this time, it attacked my right leg. Now, I have both legs with the same injury!

I recalled when I first met this enemy of mine, I had to lay off for almost one year before I could start jogging. I hope it will not take that long this time.

For the moment, I can kiss goodbye to 3km x 4 relay, Ipoh and Seremban Half Marathons. What a shame!
Posted by John at 12:45 pm 12 comments:

How I Started Running

I discovered my talent in athletics while I was in primary school. I was then, a young 11-year old boy and one of the quickest in the "police & thieves" game. I was able to catch all the 'thieves' within seconds using one leg as required by the game.

My competitive running started when I was in Form 1 at the age of 14. I actually offered myself to take part in the 1500m as nobody would like to enter the 'long' distance. Without any prior experience and training, I won the first medal of my life - a silver! Since then, I had been running for my red team and won medals in the 1500m and 4x400m.

Personally, my best achievement was when I managed to overtake a lot of adults and students aged 30 and below to finish Forth in a 8-km ex-boys road race. At that time, I was only 15 years old!

When I was 18 years old (Form 5), I ran my first half marathon - the 21.6km Alor Setar Half Marathon with a time of 1:44:53. I could have done better if not for pacing with a newly-known friend who was struggling to complete the race.

I ran my first full marathon - the sixth KLIM in May 1990, when I started working in Kuala Lumpur at the age of 22. I completed the marathon in 4:56:28. It was a painful experience as my legs were swollen and I had a 50 cent-sized blister in one of the legs. As I was poor then, I ran with the only sports shoe that I had - a pair of tennis shoe!

Ever since I joined Pacesetters in 1997, I was transformed to a better and smarter runner. Todate, I have completed 10 full marathons and many half and quarter marathons. My personal best time for full and half marathons were 3:49:48 (Penang Bridge 2002) and 1:27:04 (PJ Half 1998) respectively.

Together with my wife and a few close friends, we had participated in a few overseas runs in Songkhla and Haadyai (Thailand), Honolulu and Florida (USA), Sydney (Australia) and Singapore. So far, we still vote the Honolulu Marathon as the best -in terms of organization and participation.

As you can see, running has been part of my lifestyle. Through running I have gained a lot - physical and mental health, knowledge, wisdom, friendship and even a life partner! I intend to keep running forever!
Posted by John at 12:45 pm 3 comments:

I think the distance for each lap is approximately 1.4km. Look like I'm shaping up well.
Posted by John at 11:00 am No comments:

My next target will be the 3km x 4 relay run on the 19th June 2005. I will represent Cheras Permaisuri Team this year. As I was put in a very strong team, I have no choice but to give it my best shot in order not to disappoint my teammates.

I recalled two years ago how I lost steam upon entering the stadium. The lactic acid was so bad that my last 200m seemed like a 2km. After the run, I could see stars and the surrounding was white. I had to bent on my knee at the side of the track for a good 10-20 minutes. Yeah! It was that bad! I hope the history will not repeat itself this time around.

That's why I need to focus on my short sprint these 2 weeks even though my tendon is still not fully recover.

This special event was organised by the runners for the runners. Even the sponsors are runners and the volunteers are runners who sacrified their run to support the event. Therefore, it was restricted to a strong 30 cast.

The race was initiated by the gang mostly made up of KLCC and Kampung Pandan runners who call themselves "der pacemakers". So, without doubt, it was held at the KLCC track this morning.

Wai Mun and I arrived at KLCC car park around 6.45am. Immediately to our surprise we received a very nice goodie bag each. The bag was so nice that I wish to keep it or use it as a gift bag.

After taking some "family" photos, with the magnificent Twin Towers as the backdrop, we were flagged off at 7.30am. My initial intention was to take it easy like in a training. However, after seeing the rest being so serious and trying their best, I had no choice but gave my best effort too.

My wife was the eighth participant to cross the finishing line.

We went home with a pair of lovely "crystal-like" trophies! Many thanks to the sponsors, the organisers and the volunteers for a simple yet well-managed and fun-filled event.
Posted by John at 1:50 am No comments: 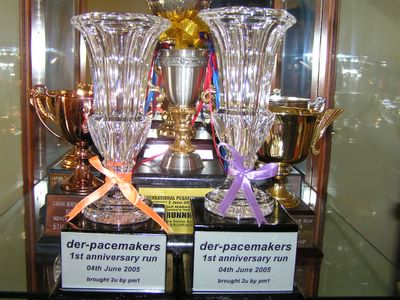 Again, I went for a hill training today at Permaisuri. I did 10 times of 100 metres dash up the hill. I couldn't find the right word to describe how I felt. It was terribly exhausting after the 20-minute workout! My legs felt so tired from hip to toe due to the accumulation of lactic acid. I took almost 20 minutes to get my legs back to the norm.