What A "Fishy" Experience

Wai Mun and I went fishing today. Believe me or not if I say we do not need any fishing rod or other equipments, but just use our feet to fish? You'd better be because it's true! However, it's not the normal kind of fishing but a fish therapy. Here, we feed the fishes instead of the fishes feed us.

When we first put our feet in a treatment pool, we giggled and almost cried out. There were many tiny toothless Turkish spa fish, of the Garra rufa species, nibbled off the dead skin on our feet. The feeling? Something between hundreds of tweezers and tiny suction cups gently pecking at your feet.

According to enthusiasts, the feeding sessions by these 9cm- to 12cm-long fish can leave you feeling massaged, glowing and with improved skin.

Many people also believe that the Doctor Fish therapy can cure problems like psoriasis, a disease that causes red, scaly patches to appear on the skin.

After the session, we could immediately feel the difference on our feet. They are much lighter, brighter and smoother. We will surely have more of this session in the future! Who knows, it may even help us run faster!
Posted by John at 8:52 pm 2 comments:

What A Boring Week

First of all, I would like to thank all my friends for showing your concern about my injury. For your update, the fracture is slowly recovering now, although there is pain on and off especially whenever I lift my right hand. I hope it won't take long to heal. I'm expecting to start some brisk walking by next week and proceed to jog, run and better still cycle from then onwards. Things gotta be slow and steady. There's no need to rush as I'm not a pro and don't depend on cycling for a living...but currently, I'm just so bored to death! Get me outta this computer...! hahaha!

So what did I do this whole week? Nothing, actually! Except getting up at the wee-hour to watch this Euro 2008 thingy. Frankly, I'm no fan of football. I woke up just because I had a bad headache due to too much sleeping, it seemed. There are a few teams that are quite impressive eg. Holland, Portugal, Croatia and Germany. I always like the Dutch team since Marco Van Basten and Ruud Gullit time. Therefore I wish them a good run in the Championship and be the Champion again! If you see me wearing orange cycling jersey, you know who've won.

As for me, I hope I will share the same spirit as the Dutch and be on top of my game - albeit at my own standard as soon as I'm ready to hit the road again.
Posted by John at 1:45 pm 3 comments:

I had a bad fall yesterday during my ride to Batu Arang. Blame nothing but myself for being careless and not focus while cycling. I hit a patch of sand at one of the corners and "crash" I was down on the ground!!! Thanks goodness, there were sand, mud and grass at the side of the curve, I had a soft landing. I was fortunate cos' if I were to fall to my right, I would end up on the road with some incoming cars behind me. That could spell more disaster!

As I was on the ground, the first thing I did was to try yelling at Dr Raymond who was just 10 metres in front of me to inform him a man is down. Immediately I felt my chest pain and a slight difficulty in breathing. The next thing I did was of course to check my precious bike which every riders would do...hahaha! The last check was then on the damage body, if any?

We - Lisar, Gane, Dr Raymond and myself then continued our journey to Batu Arang. Just a few kilometres to the destination, we had a climb. I must say this is the best part of the whole 100km of our ride. A view from the hilltop overlooking the green and beautiful palm tree estates. Quite refreshing to an otherwise boring, flat and stressful ride where we had to keep a constant look-out for traffic, potholes and any other obstacles. 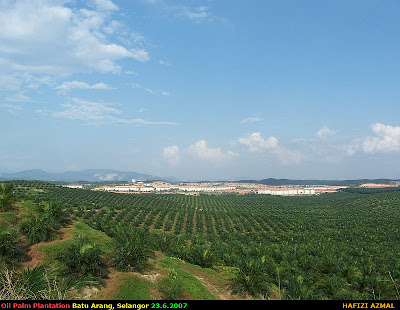 We met the gang of Emma, Siok Bee, Christie, KK and Randy at a coffee shop in Batu Arang. Apparently, Emma also crashed during the ride but escaped with a minor injury. When they saw the back of my jersey filled with stains and sand, they teased and asked if I had a mountain bike ride instead of a road bike...hahaha! Hey! What are friends for, laughing at each other mishap!

After breakfast, we bade farewell and proceeded with our own journey. Dr, Lisar, Gane and I returned to the same route where we came from. Nothing much happened this time...

As soon as I unclipped my shoe off the pedal and came down from my bike, I instantly felt a sharp pain on my right rib. I predicted something worse than I thought as I've experienced that similar pain before. I broke my rib about 3 years ago during a fall while playing ping-pong! Yeah! I know you can laugh out loud because I am such a fragile old man now!

I went for an x-tray in the evening and confirmed that I've a hair-line fracture on my right rib. Well, nothing major but just a slight pain which I have to endure for the next couple of weeks. Hopefully I can start cycling and running again after a month or two! Meanwhile I will volunteer myself to help man our vehicles at the Bukit Aman car park on Sundays morning.

Lastly, to all my concern friends and teammates, I have one sentence for you - I may be down but I'm not out yet! Keep running and cycling safely and I will be back to join you guys soon!
Posted by John at 1:12 pm 8 comments: