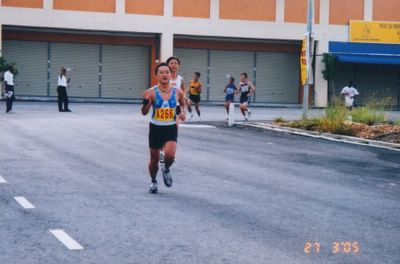 Winning Prize RM50 ...not enough for petrol. Must win more next time. 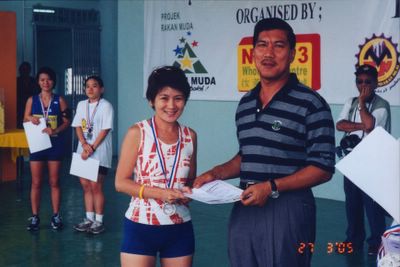 Nilai 3? Where ah? Nobody seems to know the exact location of Nilai 3. But there was a half marathon and 10k race in this "god knows where" town on 27 March. Anyway, it didn't matter much as I think runners are not only crazy, they are also adventurous!

So, my wife and I left KL earlier and headed south. We reached Nilai toll at 5.45am and saw one of the runner gang, the Pacemaker, was already there by the roadside before the toll. They were seen busy preparing the bibs on their running vests!

"Honk", the race began at 6.50am, after a 5-minute delay. It was like a mad bull run with some pushing. Come on man, it's a half marathon, you don't need to rush like crazy! After about 300 metres, it was down hill all the way. So early in the race? I had hardly warmed up so I couldn't take advantage of the decline to sprint down. At this point, I just paced with Patrick, a well respected short-distance sprinter. Breathing was hard. I kept my composure. After about 10 minutes of running, I found my rhythm and changed to a faster gear. The race course was generally up and down and was quite challenging. Yes, I like the challenges! Plus, we runners literally have the whole roads to ourselves. There's another good point. After about 10km, I increased my pace slightly and managed to catch up with some runners in front. Finally, at the last hill, I pushed to 80% of my capacity. Why not 100%, you may ask? It's because there were no markers along the road and I didn't want to be caught in their "set up", like running another loop around the finishing point! Nevertheless, I was happy with my result ... a 40th placing with a timing of 1:31:39. The "sad" part was the distance, as consented by all runners, was shorter than 21km.

Our Nilai 3 Half Marathon medals. 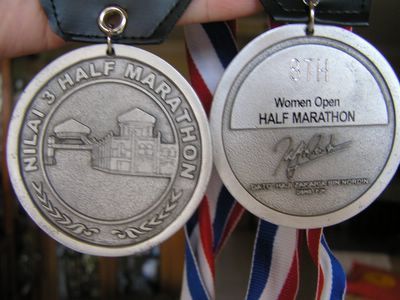 I was hit by a symptom every serious runners would have - fear of not enough training. Yes, I have not been running for the last 3 days - not because I have any injuries but mainly due to the unhealthy haze and heavy evening rain!

So I told myself, by hook or by crook, I must do a long run today. And I did. I ran 10 rounds at KLCC Park. 2 rounds were for Mon, 2 rounds for Tue, 2 rounds for Wed and the balance for today!!!

And, I have the honour of running side by side with the Kuantan TC Run's 4th placing winner, Ronnie See a.k.a PM1 from the 2nd round onwards.

18 March (Fri) - the four of us, Yew Chee Chung & his wife, me & my wife, arrived at Vistana Hotel, Kuantan after a 3-hour drive from Kuala Lumpur. Vistana Hotel is the official hotel for the Kuantan TC Run, to be held on 20 March. We were quite impressed with the organiser for having the bib and t-shirt collection at the classy hotel, considering that it's just a small-scale 10km race! Furthermore, the quality of the t-shirt and the finisher medal is simply excellent!

After the collection, we drove to Awana Kijal Golf, Beach & Spa Resort, Terengganu, about one-hour journey from Kuantan. After a simple dinner and a slow walk by the beachside, we decided to call it a day.

19 March (Sat) - Went for an easy gym work-out. After the breakfast, Chee Chung & I went swimming, followed by an action-packed table tennis game. In the afternoon, we spoilt ourselves with a Balinese spa and massage. After the massage, we drove to Chukai town to have the popular coffee and kaya bread at HaiPeng coffee house. Mind you, they even have their own website!

Not satisfied, me and my wife went for another round of massage and tried out the Swedish style in our Resort before our dinner.

20 March (Sun) - Checked out at 5.15am. Drove back to Teluk Chempedak, Kuantan. We joined the fun of an aerobic exercise after our reporting. 7.30am, Show Time. All the 10km runners were called upon to the starting line. It's a very rare occasion to be the first liner! Could see Ronnie See taking photo of himself for memory, I supposed. "Honk" the race was flagged off in an unusual way. Immediately, we were required to run up a slope. Luckily, it's just 200-300 metres long. After the down hill, I could see Ronnie, Chee Chung, William Chan flying down literally. At this point, I guessed I was among the top 15 runners. After about 3km, I could no longer see the first runner anymore. I just kept up my pace. I could feel some burning sensation on my shin. Breathing started to be heavy. Quickly changing to my cruising mode. Felt so much better. At this point, I kept reminding myself to be strong and do not give up. Saw one Indian runner with our blue PACM vest for KLIM in front. I just followed his pace. Breathing started to be smooth. Yes, I've got my rhythm. Just zig-zag along the kampung road. With another km to go, I increased my pace. I managed to catch up with the Indian runner on the uphill. I think he tried to catch me but it's too late as I sprinted down the hill to the finishing line. My watch showed 44' 04.39! It has been years since I last did below 45min in a 10km race.

...a happy ending for the running couple. 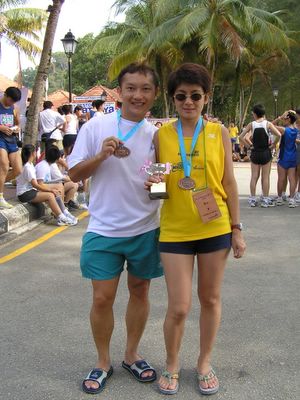 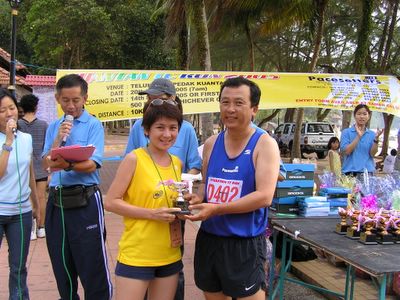 My wife is sprinting to the Finishing Line... 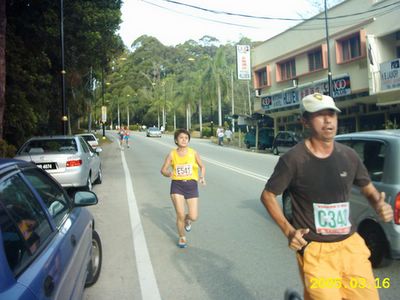 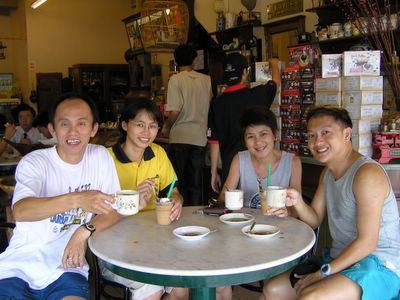 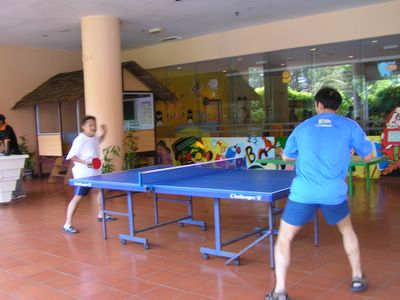 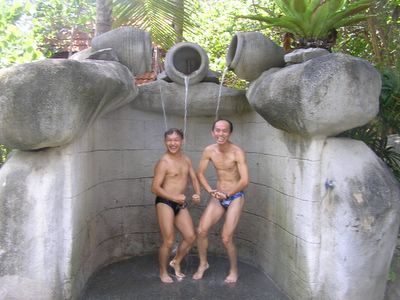 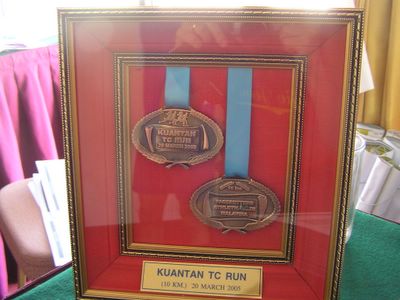 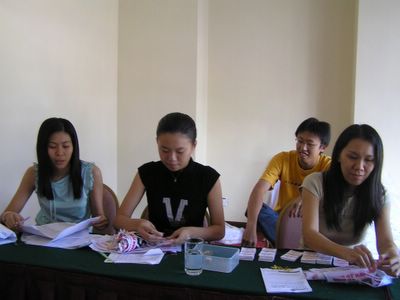 It has been a long time since the last time I did two sessions of speed work-out at Kampung Pandan Track in a week.

As usual, I jogged 2km around the track to warm up. As I was doing some light stretching, my heart told me to skip today's run. I was worried I could not last the whole session.

What a relief, Coach Chan could not come today and his son, Eugene took over his duty. He told us to do 400m x 15 times at 2'30" interval. So, we did. And here's my performance:

At last, I survived! Special thanks to my pacers, Ronnie, Azwar, Justin and Kenny.
Posted by John at 1:45 pm No comments:

First of all, I would like to welcome Kenneth Teh to our speed work-out at Kampung Pandan Track. I think he survived and passed the first test with flying colour. Well done, Kenneth!

I did my 5-lap warm-up followed by some stretching. Then, coach Chan gave us the following programme:

Completed 4 rounds, instead of 5, at KLCC track.

I concluded that I had difficulty running under the condition whereby there is traffic travelling besides me even though the organiser provides cones to separate us. Maybe it is due to safety and/or heat and pollution reasons. Or maybe it is due to the boredom and lack of cheering along these stretches at 11-21km and 31-35km. Hence, I need to improve on my concentration as well.
Posted by John at 8:30 am No comments:

6.30am. I joined two speed demons,ie Ronnie a.k.a PM1 and Justin a.k.a. PM19 for a 11km run, or more famously known to PACM members as the Double Hills run. The route is pretty hilly, surrounded by lots of tree and some bungalows. It consists of two steep climbs, hence the name "Double Hills". My wife will liken it to Diamond Head of Honolulu, Hawaii but a much steeper version minus the seaview.

Ronnie is a never-say-die runner while Justin is a up-and-coming star. Both can run 1:35 in half marathons. As the KLIM is just over and I need to improve on my speed, I intentionally joined them for this morning's training. My game plan was to stick to them as much as I could and see how much distance I could cover with their kind of pace.

We started off well. The soreness of the knee and thigh has all gone. I was pretty comfortable until the foot of the first hill. After the first and second hills, I trailed them by 2 metres. Breathing was hard then. Luckily, I managed to recover and catch up with them again at the decline of the second hill.

As we reached Tugu Negara, we parted as the two speed demons would like to continue for another 4km. I ended the run at the car park with a SB time of 52'43". Average speed was 4' 48" per km. Thank you to my pacers!
Posted by John at 7:50 am No comments:

Have been doing some light jogs for the last 3 days after the KLIM. Now, my thigh and knee are not sore anymore.

Yesterday I went to see a physiotherapist. I was given ultra-sound and massage treatments on my stiff neck. Apparently, my arm and shoulder muscles are not strong enough. I was also given a gym work-out programme to strengthen these muscles. This will certainly upset Coach Chan as he believes that runners should not carry weights.

I will certainly continue with this rehab programme until there is no more stiff neck when I run long distances. Hopefully, I can perform better in my next 10Km-race in Kuantan in 2 weeks time.
Posted by John at 9:30 am No comments:

A First Sub-4 Marathon in KL

The KLIM is the race I dread the most mainly because of its course selection. Runners need to go through many hilly terrains and the heat and the fume from the traffic was so unbearable. However, I think the traffic marshalls have done a good job this morning by stopping all the vehicles at the key junctions. And, the best thing running in this KLIM is that you will be encouraged and motivated by the honks of the impatient drivers instead of the normal cheerleading teams! What a change!

Generally, I enjoyed this run as I have been pacing well for the first 30km. After the 30km, my thigh became heavy and I couldn't lift my leg. There was a slight pain on my left knee. The stiff neck and the lower backache didn't help either and they had happened before during the long-distance training.

Lesson learned : i) must do few more 30km-40km runs in my future trainings. ii) must get treatment on my neck and back ASAP.
Posted by John at 3:33 pm 4 comments:

Our hard-earned medals. Silver for half-marathon & Gold for full-marathon. 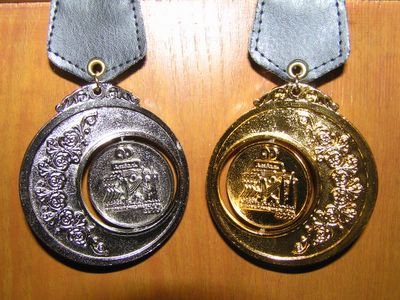 The running couple at the starting point. 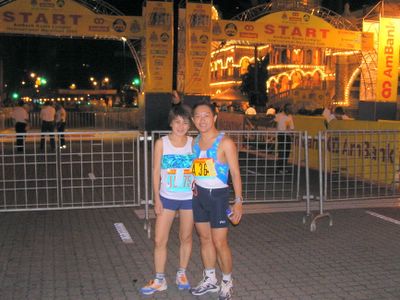 Smile all you can ... before the race starts. 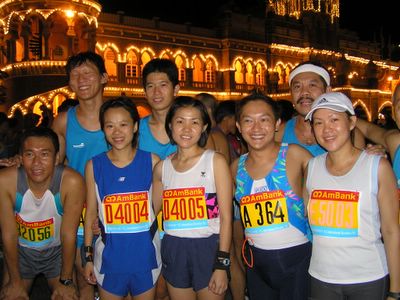 Me with Francis, one of the oldest runners in KLIM 2005. 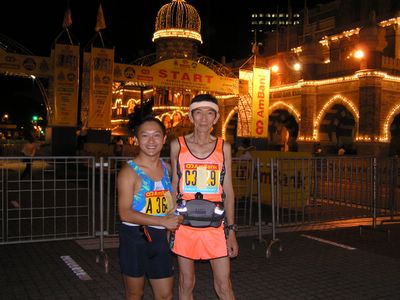 Yup...9 hours to go...the truth will be known soon! KLIM full marathon will be flagged off at 5.00am. Runners will be going through all kind of tests, irregardless how experience you are. Every marathon race offers new experiences and challenges. Your competitors are not your fellow runners. It's your body versus your mind. Therefore, a positive mindset is crucial of how you will perform in your run. I have collected some interesting quotes which may be useful to pull us through the tests:

"You Can If You Think You Can";
"Whatever the MIND can conceive and believe it can achieve" - Napoleon;
"A Winner is not one who never fails, but one who never quits".

4 more days to the KLIM2005. Could see and feel the excitement in all the runners. Some lost sleep a week ago, some started to feel the pressure to achieve good results and some decided to pull out from the race or run a shorter distance, no thanks to the sickness and injuries!

As for me, I have been eating, drinking and resting well. Everyday, I just wish the marathon will start tomorrow and get it done with. Life in this one week is so boring! It's a waiting game and you just cannot do what you like most - running, as you are supposed to taper off and rest.

Anyway, I wish every runners going for the KLIM can stay relax, take good care of their bodies and enjoy the run. Believe me,the result will come naturally. Good luck!
Posted by John at 4:32 am No comments: