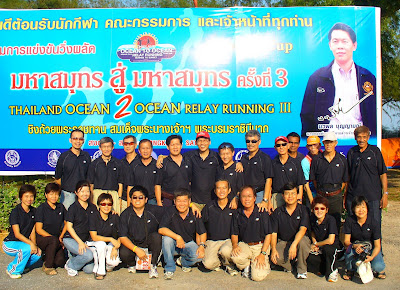 What : Ocean To Ocean Relay Running (total distance is 136.6km)

Where : Pacific Ocean to Indian Ocean, Songkhla to Satun, Thailand

How : A team of 8 runners, relay running for 3 sets per person, in the ordering number.


At 5.20am local time, all our 3 teams were flagged off together. First we saw Garry, followed by Dr Lyou and then Lim, leaving the Haad Kaew Resort after dipping their baton into the water of the Pacific Ocean.

It was still very dark. Luckily the organizer has arranged for some oil lamps to be placed along the roadside. What a thoughtful planning!

We jumped into our pre-chartered van and stopped midway to cheer Garry and also provide him some water. Thereafter we proceeded to the next checkpoint to drop our next runner, Felix. Not long after that, Garry appeared and passed the baton to Felix.

The excitement started when Uncle Hooi of Pacesetters A overtook our Felix. Uncle Hooi was in top form. He built a good 7 minutes gap before passing his baton to Lian. Our gap from them was widening further as Lian easily outran our 3rd runner Yap. At this point, Pacesetters A team morale was running high. Their captain, Richard Tan was seen jumping for joy. Even their oldest runner, Francis was busy warming up to prepare himself for his turn.

By now the gap was already 15 minutes. I calmly told Wai Mun who was the next runner, not to worry but just stay focus and try to close the gap. And yes she did! The distance was reduced to a mere 80 metres.

Our fifth runner, Carol did a splendid job by sticking to Lim’s pace and retained the distance. 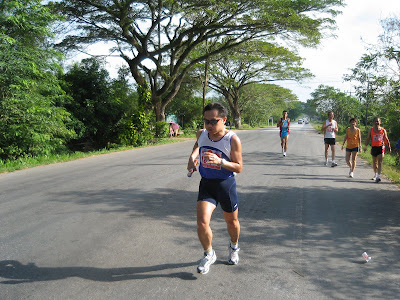 When Carol passed me the baton, Francis was already 100 metres ahead of me. Pacesetters A knew that in no time I would overtake Francis. Richard Tan tried to use all his dirty tricks to stop/slow me down. For example, he tried to hug me tightly and also invited me to step onto a banana skin he placed on the street!

I shamelessly ran pass Francis. Sorry-lah Francis, this is a race! Being the fastest runner in the team, I tried my best to overtake as many runners as possible especially those in the same category. By now, the weather was getting very hot as the sun was blazing on top of my head, even though it was only about 8.30am. I foresaw a tough day ahead!

I managed to build up 13 minutes before passing the baton to Peter. I believed Peter had to suffer the hell of his life as he had to go through a town which was definitely hotter as there were not many trees around. Really salute his strong will!

It’s our 8th and last runner, Ho’s turn. Frankly, I was worried for him as I had never seen him run before. As it turned out, he did extremely well. Besides, he really knew how to enjoy himself by getting all the high-fives from the school boys and girls and the traditionally-dressed supporters!

Soon, the baton was passed back to our Captain Garry again. This time, he had to go through the roller-coaster terrain. I was anxious in case he would walk as he always does on the upside of the Double Hill. Remarkably, he went through the challenges. I supposed it’s the responsibility of a captain that pulled him through. Bravo, Garry! 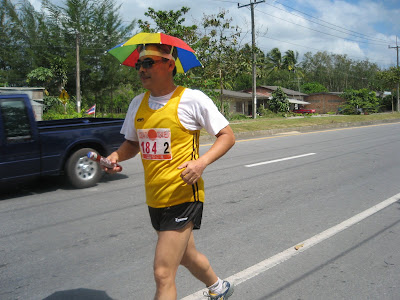 The heat is at its peak now. However, it had lesser effect on Felix as he came well prepared with a little umbrella head gear! One female runner from Penang was amazed and wished she could buy one immediately. I saw disappointment in her when I told her it was bought in China.

Not long, Lian came chasing from nowhere and overtook our 3rd runner, Yap. Fortunately, the lead was only 500 metres. Wai Mun became our savior again to make sure our team takes the lead from Pacesetters A until the finishing line.

The incredible heat had really taken its toll on most of us. I encountered a cramp on my rib which made my breathing difficult during the 3rd stage of my running. It was as if an asthma attacks you while you are running! I was almost out of breath and this was the most difficult 5km run of my life.

After completing the 3rd stage of the race with Ho being our final runner, we gathered together at the last 1km to meet him and the team of 8 of us ran in a line occupying the whole road. As we were heading towards the finishing line into Satun Pakbara Pier, we were fortunate to catch a glimpse of the sun setting on the horizon. It was the most beautiful scene after 13 hours and 13 minutes on the road. The tan we received could hardly beat how we felt right now – total satisfaction!

As we crossed the finishing line, Ho ran down the steps to the sea, dipped the baton into the Indian Ocean symbolizing our arrival and finally, the relay is over!!! We were all exhausted but relief and happy. We made our way to collect our hard earned medal and were surprised that everyone were given a beautiful jacket with our team name embossed on it. A buffet dinner was served and video clips of the recent race were shown. Later, fireworks were displayed as well. What a carnival! 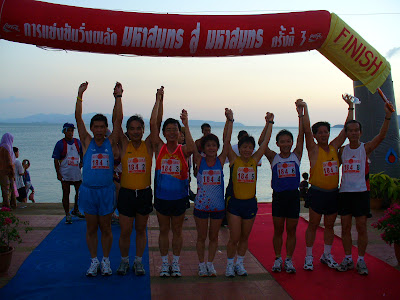 Overall, I was so overwhelmed by how grand a race like this can turn out! Tremendous efforts and thoughts put in to ensure that we enjoyed ourselves and talk about it. And indeed, this is another different race for us…

For RM45, we were treated to a banquet by the beach at the Haad Kaew Resort on the eve of the race. One could eat and drink as much as you like while being entertained by Thai cultural shows, singing etc. No questions asked. No coupon required! The next morning, we all had porridge with “Yau Char Kwai” and coffee for breakfast. Along the way, we were given sufficient supply of drinks and fruits to keep us hydrated. Some villagers made cakes and offered them to us. The organizers even arranged children at different stations to dance and cheer us. Others stood by the roadside to offer us their high-fives. It really made a difference especially when you are so hot and tired. I am absolutely amazed with the hospitality and generosity of the Thais. Thumbs up to them!! If there’s anything the Malaysian Tourism Board or Athletes Association wishes to learn, they should learn from our neighbour, Thailand.

From a simple race like this, I am glad that Wai Mun and I are able to learn and take home something with us. We learned how to run as a team (a team of 8 is certainly more difficult than a team of 4 especially if you don’t even know half of them). We need to help and encourage one another no matter how slow a person runs. We had to bear each other’s body odour (from the sweat) as we had to travel together in the same van for more than 15hours!!! And finally, we cherished the friendship we made and the team support. Apart from the heat, we never regretted making our trip here.

We would like to thank Richard Tan for organizing our trip there and our team mates for running with us. Special thanks to New Balance for generously sponsoring our group tee-shirts and throwing discounts for their running shoes. 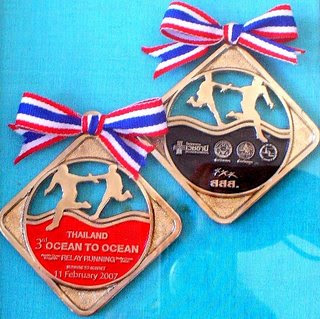 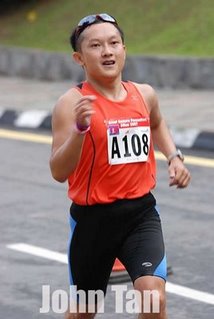 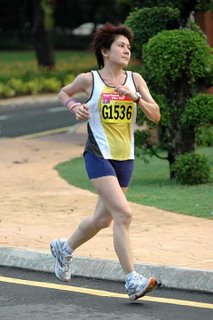 21 January 2007 – As my next marathon is only going to be in June, this GE 30km run seemed to be meaningless to me. I just wanted to enjoy the run and at the same time I hope to do better than my last year’s timing of 2:35. Deep inside my heart, I knew I should have no problem, as this year’s distance is about 800m shorter than last year’s 30.1km.

This year’s event has indeed attracted more quality runners. It was obvious that most of the runners were very determined, preparing well for the main objective – the Kuala Lumpur International Marathon to be held on 18 March 2007. I was surprised when I realized that my fellow runners who are usually slower than me in training, suddenly ran side-by-side with me. As the result of this, I was influenced to run faster than I had planned even though I know I am not in perfect shape that very day.

The first loop of “bull run” covering the Double Hill, I did 53:57. After that, I tried to increase my pace for the next loop from the National Memorial to Hartamas. However, I found myself tiring down especially after the mosque. I think the huge slope prior to the mosque has taken its toll on me. I was a spent force! Luckily the organizer provided power gel at the Hartamas water station. I was recharged again and continued my journey back. I did 46:11 for this section. I need to mention that I encountered an unpleasant experience at this water station – a fellow runner unintentionally spit water to the right side of my face and the water fell into my cup! Sigh!

For the final section of Hartamas to the Lake Garden, I did 48:04. I was struggling all the way – consequence from the lack of training. I must say it was my mental fitness that helped me cross the finishing line as physically, I was totally worn-out! My back, shoulder, thigh and Achilles tendon muscles were aching for the next 3 days after this race.