When I viewed the beautiful Angkor Wat pictures taken by Runwitme last year, I was inspired to visit the place and at the same time run the Angkor Wat International Half Marathon there.

Therefore, when Air Asia was having a promotional blitz, John & I grabbed the offer and booked ourselves a seat without any hesitation. Two months before the race, Uncle Hooi dropped a hint that he was keen & asked if he could join us. What can we say to this healthy 70 something marathon enthusiast? He certainly deserves to run any race anywhere cos’ he really knows how to appreciate each & every one of them. We welcomed him to board with us just as we welcomed Yew Chee Chung to join us in Chiangmai last year. 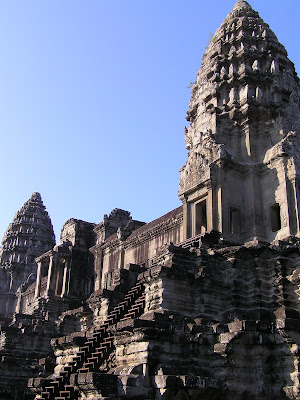 Angkor Wat International Half Marathon 2007.
This event is organized by Khmer Amateur Athletics Federation & the National Olympic Committee of Cambodia, co-operated by the Japan Medical Joggers Association & NGO Hearts of Gold. Therefore, it was no surprise to me when I saw the number of Japanese runners turning up to support this marathon. I was fascinated by how an event like this can draw such a multitude of runners from all over the world…from both far & near to come, contribute, run & raise fund in support of the landmine victims, education & prevention of HIV in Cambodia. The response was overwhelming.

Pre Race
We managed to catch up with a local lass, Arun Sinketh (Gary’s girlfriend) the eve of the race. Arun made no mistake when she took us for dinner at Khmer Kitchen. The food there was simply delicious. I took a liking to Khmer food almost instantly as it was healthy, not too spicy & not expensive. Arun works as a Public Relation Personnel at the Angkor Hospital for Children. She shared with us her work at the hospital, her lifestyle and taught us some common greetings in Khmer. John & I felt very blessed to have made new friends every time we travel & the most astonishing part was we didn’t look for them…we just met. Many times, they happened to be our friend’s friend or …we just met. 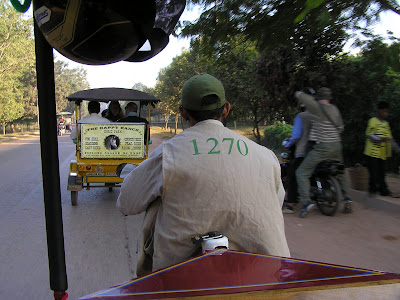 Race Day
As usual, we woke up during the ungodly hours of the day & hopped into our pre booked tuk-tuk that took us to the marathon site. The morning was rather cold but bearable. When we arrived at the starting point, the magnificent view of the Angkor Wat greeted us. What a sight to behold! We met 3 of our other Malaysian friends – Tee, Subra & Norizan who also came for the race & took photos with them.

Later, a lady approached us & introduced herself as Koo Ai Lin. Ai Lin is a Malaysian working in Singapore for many years. She is also a marathon freak and like us, running & traveling at the same time. 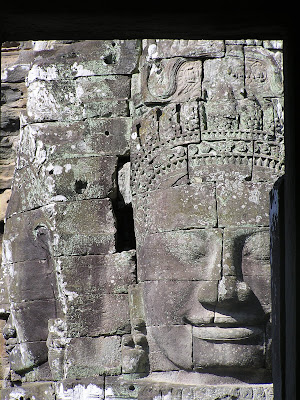 Water stations were adequate. In fact, I found it such a waste to be given a whole bottle of water to runners as most was unable to finish them. The turnout of supporters comprising of mainly little children, never failed to amaze me. They came…waited…clapped…cheered…laughed & offered us their hi-fives! Some were a bit shy and just smiled. Most of them wanted us to clap their little hands or touch their little cheeks when we ran pass them. I slowed down my pace to hold their tiny hands & made sure that I didn’t miss any one of them. Who cares about recording a good running time then?

After the 17km mark, my back began to ache as we were running on the hard surface of the gravel road. My buttocks hurt too. But then…there standing ahead of me, were another row of children. They were waiting to cheer me – their generous applause took my pain away & their giggles warmed my heart. I was truly touched by their simple gestures. They are all so innocent & poor and life is hard on them but they remain happy. I was smiling throughout the last few kilometers admiring the scenes all the way until I reached the finishing line at 21km. Running at a relax pace, I was pleased that I could still clock below 2 hours. 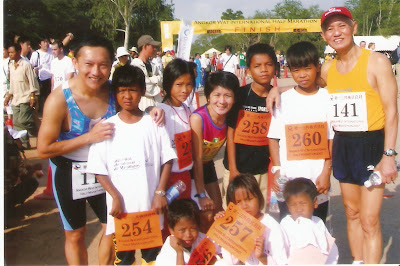 Later, much to my disappointment – there were no position, no prize money & no medals at all. Nevertheless, I comforted myself that the running experience in the World Heritage Site & one of the 7 wonders of the world itself is the prize & it’s priceless!

What made us proud is that we were able to witness how runners from all over the world gathered together in the name of charity (or love) to raise awareness & funds & to help people who are less fortunate in a foreign land. My pain pales in comparison to the millions who have been afflicted by HIV etc. Hopefully, in our lifetime, we will be able to find a cure or some kind of solutions & then John & I will be proud to have played a small part.

An estimate of US$13,000 was raised from this year’s marathon & distributed to different charitable organizations in Cambodia. 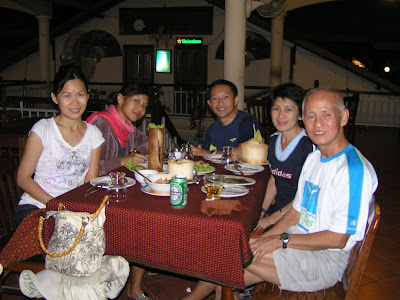 Post Race
The rest of the day was spent at leisure. John & I pampered ourselves the much needed massage. Later, while Uncle Hooi & John were having their siesta, I managed to finish reading The Alchemist which left me bewildered cos’ at the end of it, I still find some contents too deep to comprehend. Anyway, we caught up with our new friends Ai Lin & Soo Ling for dinner at the Bayon restaurant that night and had a marvelous time.

We were excited to explore other interesting places in Cambodia for the next few days of our stay there.

A Medal, A Movie, An Awakening
Back to my humble abode, I gazed at the wall panel now filled with a hundred something medals. Each one has a story to tell. They speak to me of my achievements and reminded me of every race experience, friendships formed, mistakes made & lessons learned. Each one holds some meaningful memory. Here, back from the Angkor Wat Marathon, there’s nothing to remind me I’ve run there?

3 days later, I was glad that I made the decision to attend Dr. Aaron’s workshop where the movie ‘Peaceful Warrior’ was shown. The movie relates so well to my recent running experience that inspires me to write & share this with you.

‘Peaceful Warrior’ is a sports movie not about imagined perfection of victory but about heart. It explores the highly competitive world, while introducing an astonishing philosophy that awakes the human spirit. It is a whole new ideology – one that values consciousness over intelligence and strength in spirit over strength in body. It is about letting go of all expectations and simply live in the Now. Ultimately, celebration of achievement is made possible by an open mind.
I began to fully understand that winning a race or getting a medal is not so important after all.

It is not about the medal - it is my passion to run. With or without the prize money or medal, I’ll still run at the end of the day because I enjoy running. And there at Cambodia, I was actually running for a good cause and I was proud of it.

It is not about the race - it is the experience. And this experience is totally refreshing as I didn’t have to push myself crazy to record a good time. I shook hands with the locals, hi-fives the little children along the way and it just felt so good!

It is not the destination - it is the journey. As I reflect, my journey here has been enriching. I’ve learnt that if my purpose to Cambodia is to run & take a break at the same time, then I should not be expecting so much (eg. the medal!). I should enjoy the run & the beautiful sceneries. I should savor the moment and be thankful for having John & so many other friends to share, travel & run together with me all these years.

Yes, it’s not about the medal anymore…

One hundred years from now…
It will not matter what kind of car I drove, what kind of house I lived in,
how much I had in my bank account, nor what my clothes may looked like.
But the world may be a little better because I was important in the life of a child.
- author unknown
Posted by John at 7:44 pm 3 comments: