Glad to meet Ajeep a.k.a. PM26 at the Kpg Pandan Track yesterday evening. He has his bandage off and should be able to start training again. He said he is going to start with an easy walk. Welcome back, my friend. You can do it!

And, what was I doing in the Track? Hmmm... tell you a secret, I was joining Coach Chan's training. As a result, I got a tongue lashing from Ajeep for being stubborn. He said I should be resting my achilles tendon properly. I acknowledged what he said was correct but how I can let slip of any chance to run? hehehe!

No bad, I could still maintain at 4'30" per km pace considering my lack of running lately. In fact, after the training, I felt good as I still had so much reserve. Of course, my tendon stressed a little (hope Ajeep and my wife does not read this!) but I believe it should be alright after a day or two.
Posted by John at 3:45 am No comments:

A very small crowd gathered at Bukit Aman car park this morning. It was a very rare sight as usually the car park will be fully occupied by the PACM members. The main reason was that most of the members had gone for their annual Track Meet in Cheras Football Stadium.

As most of them were walkers, I then decided to join in and walked with them. They are training either for the MM Big Walk or the 24-hour Walk. We walked on the usual Double Hill route. I think training on this hilly route is good to strengthen our muscles and improve our skills to tackle the up and downside of the hill. To me, walking requires a certain degree of technical know-how. It's quite interesting when you master the skill and your walking becomes more speedily and effectively.

After breakfast and shower, we went to the Cheras Football Stadium to catch our dear friends in action in the Track Meet. 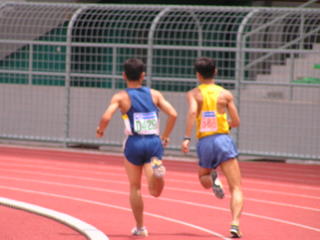 Tey overtaking one runner in the 4x400m. 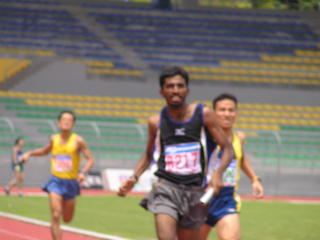 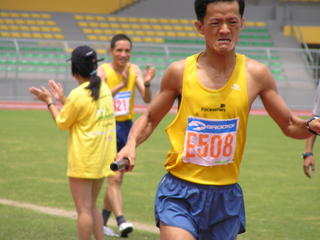 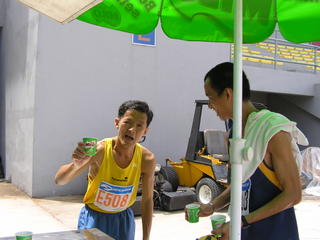 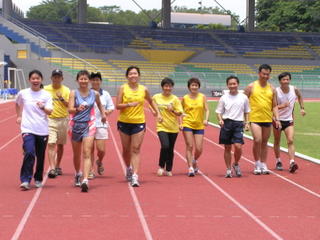 Yes, I have increased my mileage to 2 hours of non-stop walking at Kpg Pandan track yesterday.

Well, the truth is after walking for just 2 hours, I had a blister near the toe, a burn under my armpit and an uneasy sensation at my asshole!!!

Yet, I still choose to believe I can do it. We shall see!
Posted by John at 8:20 am No comments:

I received the following interesting article from the event organiser which I like to share with you, especially if you will be one of those at the starting line of the event:

The third Malaysia International 24 Hours Walk is no ordinary event as it is not something that not everyone can sign up for. Due to the demands the event places on the physical as well as mental aspects of the participants, the Malaysian Race Walking Association (PLJKM) scrutinizes the entries before giving the nod to the participant. And come September 18, some 350 participants from 15 countries will try to overcome both mental and physical barriers as they try to achieve the feat of becoming a centurion, which is to break the 100-mile barrier within 24 hours.

The event that will be held at Genting Highlands will see the return of defending champions Jose Mora Bernardo of Spain and Irina Putinseva who won the men's and women's events respectively in 2003 at the same venue.

"It is a race against the clock and both the participants as well as spectators are in for a treat as the endurance factor will be pivotal in a race of this kind," said PLJKM president Datuk Peter Chin during a press launch of the event at Wisma OCM on Tuesday. "A special 800 metre track will be laid out and walking around the clock will no doubt put a tremendous physical strain.

"The participants are allowed to rest, eat food and even take a nap during the walk. But they will lose valuable time if the stops are too frequent.".

No Malaysian has broken into the centurion club and the closest participant that came to it was Effendy Suhaili from the Armed Forces who clocked a distance of 155.70km in the event in 2003. Most of the participants who want to achieve the century mark often do it with a minimum of breaks. The breaks generally last only for a couple of minutes to change shoes or have a quick rubdown or just sit down for a drink for a little bit. And as the participants move towards the later stages of the event, some are just physically wrecked.

Thus it is best to keep the stops short and keep on the move as the participants endure the pain to achieve a milestone. "But this is more of a mind over matter event as the participants need to overcome the pain barrier at times," said Datuk Peter. "The climate at Genting Highlands suits the foreign and local participants well and we are fortunate that sponsor's have been supporting this event well ever since it was first held in 2001."

What Is Race Walking

Race Walking began as an ultra-long distance sport in the eighteenth and nineteenth centuries and still maintains a great following in Europe. Easily the most famous event in the world was the Paris to Strasbourg walk (320 mile 3 day event) which has now become the Paris to Colmar (close to Strasbourg). This event is over a distance of 520km and is generally won in around the 60-hour mark. Other events are the Roubiax (France) 28-hour walk in which many European countries enter teams, the Lugano (Italy) 100 km and the London-to-Brighton (53 mile) event. On top of this, most countries have an active Centurion Club, which offers life-long membership for all sub-24 hour 100-mile finishers.
Posted by John at 11:38 pm 1 comment:

My next major race will be the 24-hour walk in Genting Highland on 18 September 2005. It's just 2 months away and I'd better start training for it.

On Wednesday, I walked for one hour at Taman Tasik Permaisuri. It was a bit awful in the beginning as I felt like I had been "watched". I think those people were amazed how a man like me could possibly "twist their butt" like that! Ha! Ha!

Nevertheless, I felt so great at the end of the training session, especially when I walked pass many slow joggers!

I am now looking for more walkers to join me. Any takers?
Posted by John at 12:00 pm 1 comment:

It was drizzling and the weather was superbly cool on this lovely Sunday morning. Who on earth would want to get up or leave their cosy bed to go out and run? But, we did.

This morning only a small group of us gathered at the Bukit Aman car park. Most PACM members had gone to Seremban for their half marathon.

We started at 6.48am. I took it very easily and carefully as it was going to be my longest run in 5 weeks - a 11km Double Hill route. My objective was to test if my achilles tendon injury has improved.

During the run, I could feel a slight pain on my tendon occasionally. Surprisingly, my fitness level has not dropped that drastically. We finished in 1:12.

I concluded that I could start running again but it has to be slow and easy.
Posted by John at 3:50 am 1 comment:

I have a 30-minute running session today - in the pool. Good exercise but nothing beats the real action on the road. It is more enjoyable and you can really sweat out! I have no choice but to keep doing it in the water in order to maintain my fitness level. Sigh! So boring...
Posted by John at 1:25 pm No comments: 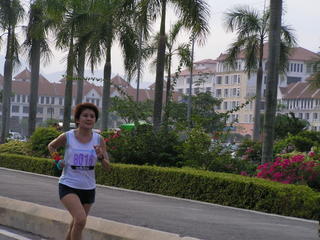 My wife on her way to the finishing line. She clocked 1:50:47 and was placed 12th in her category.

I turned cameraman on that morning.
Posted by John at 10:15 pm No comments: