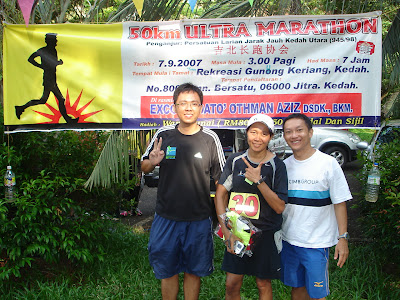 The report for this run will be short just as I cut short my run during the race.

On the eve of the run which was held on 7 Sep (Fri), I felt both legs were weak upon waking up. Expecting the worst, I checked on my body remperature and true enough, I have fever of 37.5 degree. However, as I had earlier agreed to Ching Tai, another fellow runner and participant of the run, I braved myself for the trip back to my hometown - Alor Setar, about 5 hours drive up-north from Kuala Lumpur.

I couldn't eat much for dinner as I felt like throwing up. Neither could I drink much as my stomach also failed on me - which I don't wish to elaborate here the number of times I went to the toilet! Thanks to one Chinese herb medicine - Wong Lou Kat, I have a good-but-drowsy night sleep even though it was for a mere 3 hours!

It has been a very hot day in Alor Setar the whole day we were there. Just as unpreditable as I'm, the sky suddenly opened up and poured as if the organiser needed to cancel the race. Honestly, I was so relief as it affirmed that I would not start the run. But then it stopped after just an hour or so!

There you go, I dragged myself out of the bed with another hour to the gun time. We reached our destination - Taman Rekreasi Gunung Keriang, the Start and Finish point just in time for a light stretching. At 3am the run was flagged off.

Although there were only 63 runners taking part, it was never short of fire and enthusiasm. Everyone was running like brothers and sisters, motivating and cheering each others. Our common goal was to complete the dreaded 50km mark! And because of this energy, I managed to cover until 15km mark before my stomach gave way again and I have to call it a day. A "DNF" is never in my dictionary but I think I have to accept it and be humbled by it and life goes on!

Call me a reflexible guy as I quickly volunteered my service as a waterman by handing the runners cup of drink and sponges.

Will I do the 50km again if you may ask? It's definately a YES!

Congratulations to Ching Tai, Ben Swee and Narumol for their achievement in the run. For more pictures, visit Tey's blog.
Posted by John at 7:06 pm 4 comments: