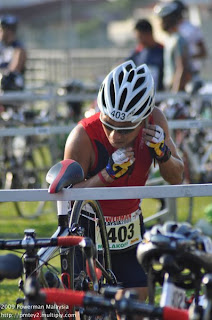 Powerman or Tau Foo Fa man? After 4 hours and 15 minutes of running and cycling under the super hot sun, I felt like a soya bean curd being cooked inside a hot oven! I almost melted!

Even though I'm still recovering from all kinds of pain on my legs resulting in lack of training, the optimistic side of me was hoping that I could still beat my previous year's timing of 3:53.51. Try I did, but in the end I was satisfied to just be able to complete the race within the 5-hour qualifying time. 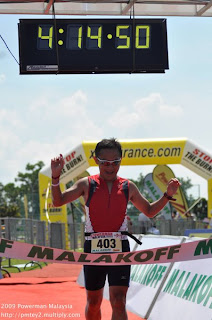 Ironically, my only improvement is in both the transition areas!

I mentioned to Tomatoman before the start line that this year's Powerman would only be part of my training. And after this gruelling work-out, I couldn't be asking for more.

Now it's time for some serious trainings - my next agenda...the Xiamen Marathon! Bring it on! 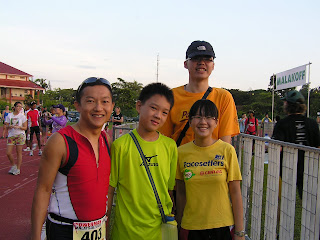 P/S I would like to thank Lok, Jason and their families for leading us to Lumut and back safely. My appreciation also go to Tey, Victor, Jenny and Yap for patiently taking photographs under the scorching sun and everyone who cheered me on during the race. Last but not least, I would like to extend my heartfelt gratitude to my wife for her constant encouragement and support.
Posted by John at 7:27 pm 6 comments: