This is a True Story:

A son says to his father: 'Dad, would you be willingly to run a marathon with me?'

The father, despite his age and a heart disease, says 'YES'.

And they run that marathon, together.

The son asks: 'Dad, can you run another marathon with me?' Again father says 'YES'.

They run another marathon, together.

One day the son asks his father: 'Dad would please do the Iron Man with me?'

(Now just in case you wouldn't know, 'The Iron Man' is the toughest triathlon in existence; 4km swimming, then 180 km by bike, and
finally another 42 km running, in one stroke).

Maybe this doesn't 'touch' you yet by your heart strings... until you see this movie .

http://www.youtube.com/watch?v=VJMbk9dtpdY
Posted by John at 8:28 am 6 comments: 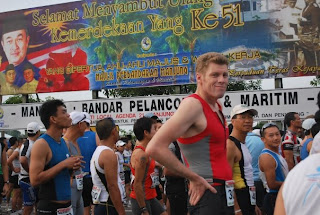 My Simple Goal
My aim was to just finish the race within the qualifying time and win a medal to dedicate to my beloved wife as a gift for our 8th wedding anniversary which happened to fall on the very same day!

My Conservative Race Approach
As it is my maiden participation, my strategy is to stay as comfortable as possible for the first 2 disiplines and as focus as possible in the final run.

A Rocky Journey
It was to be my event of the year and I have started training a year ago, especially on cycling. I used to cycle to school when I was 14-15 years old but that was on a mini bike! So, cycling on a racing bike is a completely new experience for me. It didn't help when I broke my ribs twice in Ijok and Titi during training. I had 3 stitches on my eye brows...the many scars on my chin, arm and thigh have added more life and colour to my short 1-year cycling experience. Thank God I didn't let these negative elements dampen my spirit. I must also thank Wai Mun for her understanding and care as she didn't even complain a bit especially on the second heavy crash in Titi. I guess marrying an athlete is the best decision I've ever made in my life!

As much as I wish to improve on my run by increasing my mileage and speed, I find it quite impossible as my "old faithful friend" - archilles tendon injury came back to revisit me again and again. This is rather frustrating when we all know that the running legs are important in race like Powerman!

I did 2-3 brick trainings to enable the leg muscles to adjust and get used to the requirement on Race Day. I must confess that I failed miserably during those trainings! I couldn't even complete all of them, eventho' it was only half the distance, as I find myself really uneasy running under the hot sun. Having said that, my confidence level went down to practically ZERO! My only motivator is winning the medal for my wife on that special occasion - so by hook or by crook, I told myself that I must cross that finishing line, rain or shine!

The last 2 months prior to Race Day is a big uncertainty as my Scott was still under repair and I had no choice but resorted to stay at home. My anxiety heightened because my fellow training buddies were busy cycling to places. It was only 2 weeks before the Race that I finally got myself back on the saddle again, courtesy of Gerard and Jezamine. They are so kind and generous to lend me their bikes so that I could at least train on them. Then, the night before leaving to Lumut, I received the greatest news that Bike Pro finally got my Scott fixed and returned me. Imagine, my joy...to be able to make my debut on my own bike! Great! 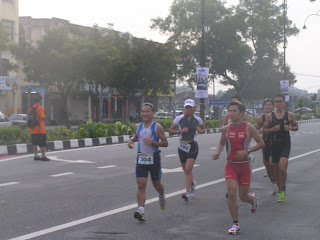 My Virgin Race
At 7.00am, after parking my bike at the designated lot, it was business as usual - photos sessions, chit-chatting, toilet do and light-stretching.

The race was flagged off at 7.30am sharp. I started slowly but steadily. Most of my friends were already ahead. Later, on the second of the 5.5km-loop, I met Lisar who cheered me on and acknowledged that I was holding back but it was good to maintain it that way, especially during the early stage of the race. My official time for Run 1 was 51:46. Transition 1 was a slow 2:37.

Cycling is my weakest link. Therefore, I was not surprise at all when the Ironladies Siok Bee and Lisar zoom passed me at the early stage of this routine! Initially I found the headwind a bit irritating but after a while, I totally forgot about it. Honestly, throughout the ride, I prayed hard that I don't get a flat. I took the risk of not bringing any spare tube and air pump. Thank goodness everything went well in the end. It must be contributed by the good road condition! Special thanks to the polices for manning the 3 junctions! My official bike time is 2:02:32 (average 31.3 km/hour - a PB for me!). Transition 2 was 2:12. 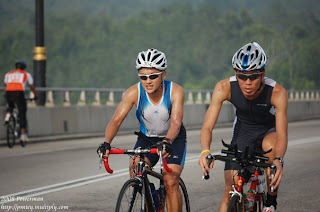 Run 2 was what I dreaded the most. That was the time when you are already so drained and the sun is high up there, burning mercilessly on our heads and skins! I drank one whole bottle of oralites before I continued to run the last 10km. Even with a cap on, I found the heat unbearable. Not long after, I experienced a mild cramp on my thigh twice, I slowed down the pace and to my relief, the pain gradually subsided! The world felt like so slow. As I entered the stadium for my first loop, I heard Wai Mun cheering me, "Good pace. Keep it up". That really boosted my spirit! I just soldiered on for my final 5km. I found the water station a bit stingy; providing just a quarter cup of water! Come on, this is the time when Powerman both the powerful or powerless needed it the most! Nevertheless, with or without enough water, I wanted so badly to cross the finishing line. At last, when I sighted the Start banner I knew the end is near...wooh! friends and supporters cheering me at the sideline. At last I touched the finishing line with an official time of 3:53:51and ranked 11th in 40-44 age category, the 84th male to hit the tape. My Run2 was timed 54:41.

When I received my first Powerman Medal, I hung it over my wife's neck and feeling good to know that she is so proud of me because she told me so! 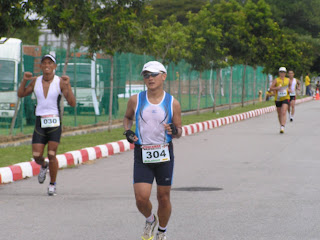 Will I do it again?
Like with any marathon races, after the pain is gone and forgotten, you will certainly see us again hitting the road and burning the rubber in no time. Therefore - we'll meet again next year!
Posted by John at 8:07 am 6 comments: