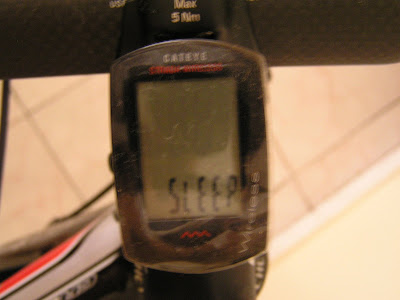 I was asleep when John excitedly woke me up to prepare for the Century Ride. Apparently he has already been sleepless 2 nights before the race! Once everything has been set up, John, Wai Mun and I slowly got ourselves to the Starting Point. While John mingled around with his friends like Tomatoman, Gerard, Michelle, Yit Thing, Siok Bee, Lisa, Gane, Chee Chung, Carol and my god father Lok Chan Chuen, I observed and saw so many hi-tech and branded bike, eg Cervelo, Time, Trek etc. Most cyclists looked seasoned and fit. Immediately I had a goose bump! John was to cycle me for 160km this morning and it would be our farthest so far.

When the race flagged off at 7.10am, John and I gingerly started our debut at the back of everyone. It was not a mad rush as we were there just for the experience. Nevertheless, whenever we saw Wai Mun and Bro Tey taking our photos, we posed confidently! 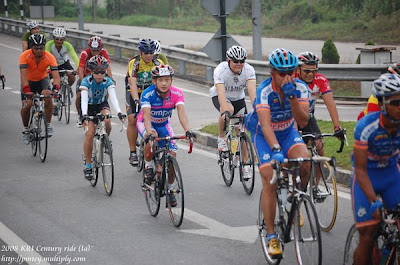 After a few kilometres, a train was formed, led by cyclists wearing the LeTua jerseys. John and I quickly followed them from behind. Michelle and Tomatoman also followed suit. It was so much easier and faster by drafting behind them.

Soon we reached the 20km mark. Suddenly I felt strange and then realised that I had a flatten rear tyre. Oh no! Left with no other choice, I moved to the roadside and wonder what to do as John didn't bring any airpump with him. Fortunately, Tomatoman was kind enough to turn back and came to our rescue! While we were figuring how to fix the tyre, an official mechanic brother came and helped. Soon, everything was settled in 10-15 minutes.

We quickly continued our journey. This time there were no cyclists at sight either in front or back of us. I felt bad and guilty especially to Tomatoman as I have delayed him. Immediately I set a goal in order to put my saviour back to the peloton. I got in front of him and pushed as hard as I could, with him drafting behind. Later, we found ourselves overtaking one or two slower cyclists and then a group of cyclists. 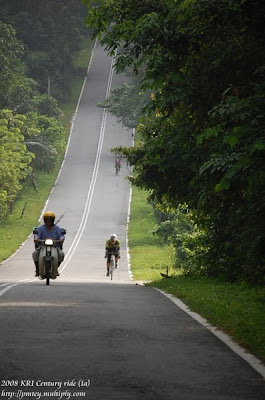 As we reached the kampung-road of Sayong, we were welcomed by a huge incline. There were a few cyclists who got down to push their bike. Still, Tomatoman and I kept pushing and were awed with the rolling uphills and downhills ahead! Yahoo! I totally enjoyed this roller coster ride!

I think I've pushed too hard at the countless uphills that John has his both thighs cramped at about 75km! Being inexperienced, he obviously didn't know what to do at this situation. To come down from the bike and stretch his legs? Or just carry on... but what if he falls down and hurts his rib again later? He was a bit confused but by luck we made a right decision by changing to lighter gear and continued. The cramp just vanished after a while. What a relief!

We reached our first check-point at 76.5km where we met Jason Thiang, Chicken Yong, Ken Kan and Michelle who has done credibly well thus far. John filled his stomach by consuming 2-3 bananas at one go. Jason then suggested that we formed a train and off we went. 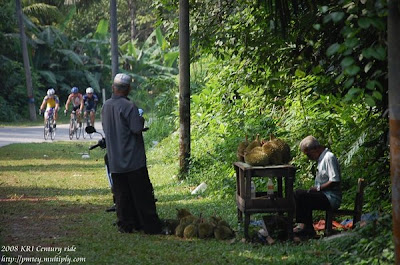 I managed to follow Jason and Tomatoman until 88km when John had his second attack of cramp. This time it was on his hamstring. Again, I had to slow down incredibly and soon, the image of Jason and Tomatoman became vague and then slowly disappeared out of sight!

At this point, my average speed was 29.7km/hour. By cycling alone, I knew I couldn't maintain anymore. Therefore I decided to focus on completing the ride instead! Soon, mentally, we were at peace.

We reached another water station at 103km in Manong. John swallowed his packet of power gel provided by the sponsor and refilled his bottle of water. There were now 4 cyclists and we formed a small group and pedalled on. John felt good after this water station perhaps due to the effect of the powergel. Now, I'm left in dilemma - should I increase my speed and move on? or stick to this "not so fast" train? Eventually, I chose the latter as cycling in a group, irregardless of the speed is definitely more fun and easier. 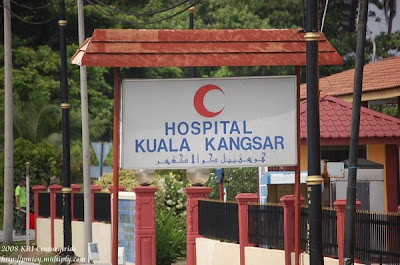 At 118km, we had our final check-point in Kuala Kangsar. I was so glad to meet Tomatoman here. I saw Jason having his breakfast in the nearby coffee shop! Talk about enjoying life...Hahaha! Tomatoman and I wasted no time and continued our journey back to Chemor. Soon, we passed Hospital Kuala Kangsar where John was born (this is the 1st time in his life he actually saw the place of his birth)!

After a few kilometres, sensing that Tomatoman was slowing down, I moved forward hoping that he would follow closely. But it was not to be. Later after the race, he told me he has a leg cramp too! Sorry bro, I didn't realize that.

As John pedalled on alone he was thinking of calling his no 1 supporter - Wai Mun to expect our arrival. But before we reached Chemor, we had to handle so many traffic lights near Sg Siput town. Just like a slow runner taking part in a marathon race, there were no marshalls to take care of your safety towards the tail-end of the race anymore! This is my only regret about this otherwise well-organised event. 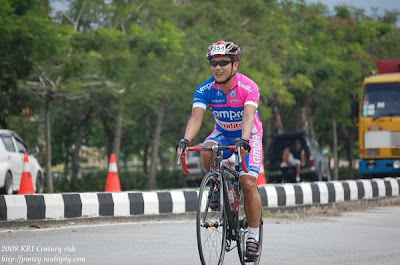 After slightly more than 6 hours of cycling, we finally reached the finishing line. Of course there was no grand or powerful ending like what we always see on TV in the Tour De France or Le Tour De Langkawi! But the fact that we were able to overcome some obstacles and complete the whole 160km made us feel so good. Yes, John and I are still proud of ourselves.

P/S many thanks to the following persons:
1) Tomatoman for the tyre repair and pacing,
2) Tey for the wonderful pictures (John didn't know that he looks so stunning until he saw your photos), and
3) my no 1 supporter - Wai Mun for driving me to-and-fro Ipoh. Sorry to keep you waiting so long at the finishing. I promise I'll come back earlier next year.

Happy cycling and see you next year in Century Ride! 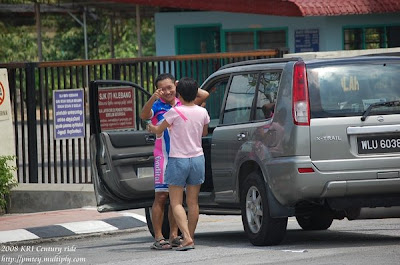 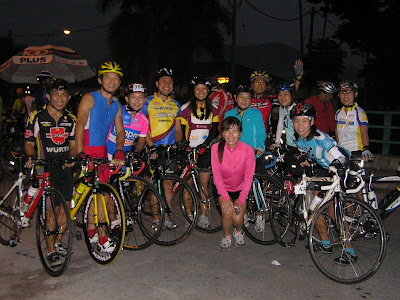 One for the album. 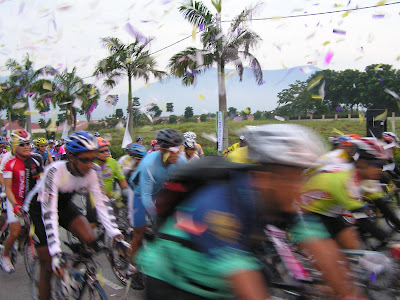 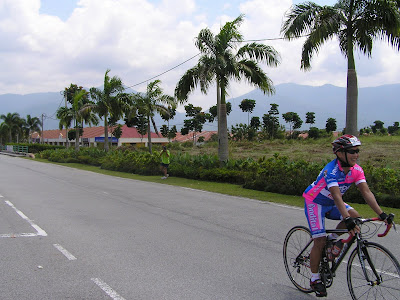 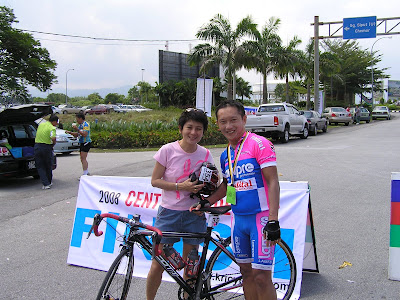 My NO 1 supporter and fan! 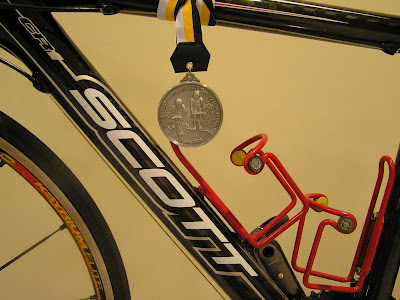 Scott and his first medal.