Pattaya Marathon 2009 as a Pacer 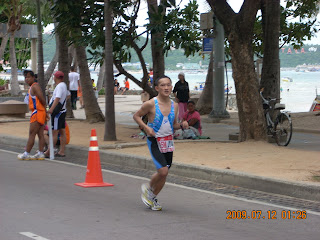 If I have one word to describe the Pattaya Marathon - it was like Tom Yam whereby it has a mixture of flavours...hot, spicy, sweet and sour. The weather was also a mixture of humid, cool, warm, strong headwind and light drizzle (which we didn't get to enjoy as we were already in the hotel). The terrain was quite tough and challenging especially after halfway mark - lots of inclines with 2 big hills at approximately 36km and 38km!

When we were at the starting line at 4.30am local time, we were already drenched due to the high humidity. After the start, I just set a pace where I felt was comfortable enough to bring us, Patrick Lee and I, back within 4 hours. Patrick was determined to do a sub 4 hour after his close encouter in the recent SC KL marathon. I am also as committed to help him in achieving his target.

After a left turn out of the town, the weather turned slightly cooler and breathable. When we reached 10km, my watch showed 54.17. I told Patrick we were on the right track as I estimated we could finish in 3:51 with 9 minutes backup. I didn't know if my words of encouragement have a positive or negative impact on him as he seemed to be charging ahead whenever he saw a runner in front of us. Is he purely motivated or is he secretly setting a higher target? I didn't know. What I knew was I was trying to keep up with his pace at times. Of course it's not fair for me to slow him down if he was in good form that morning. True enough, when we reached 20km mark, our time was 1:47 instead of the initial plan of 1:50!

At 21km, he started breathing quite heavily. I told him to concentrate on his breathing as I sensed that he has started to slow down his pace. The start of the inclines at this point didn't help at all. I forgo my targeted pace and tried to "pull" him out of his doldrums. I thought I succeeded but not too long, when we arrived at the 26km mark, he signalled me to go ahead. Before I bade farewell to him, I told him he could still make it as there's a 9 minutes backup. Then I soldiered on myself.

From then on, the journey was quite lonely and boring. As we turned into the coastal area from 32km onwards, there was a strong headwind that we had to encounter. Although it was a hindrance, I welcomed it wholeheartedly. But then, at 36km mark, I faced the biggest challenge of this race. Ahead of me stood a big hill almost one kilometre long...I almost wanted to give up! I managed to brave myself and ran as fast as a snail! This was fortunately followed by 1-km downhill which was a huge relief!

As we made another turn, I almost fainted with what I beheld - another slope like our own Double Hill! Try to imagine running Double Hill after having run 38km and you will get what I mean.

The last 4km was just a test of mental strength. I did a swift mental calculation and gosh, I might fall out of 4 hours! Faint or die, I had to increase my pace and finally, I crossed the finishing line in 3:58.19. 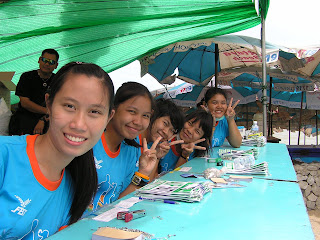 A big thank you to the Thai Organisers for their hospitality, generosity and an event well organised. What amazed me most is runners get to run on three/four lanes and only one lane is open to the traffic. The ratio will definitely the reverse in Malaysia!

My appreciation also goes to my good friend, Gary Goh for making all the arrangements for a smooth and enjoyable trip in Bangkok and Pattaya.

Congratulations to the age-group winners - Uncle Hooi and Chooi Lin for winning some cash prizes.

To Patrick, I'm sorry I failed to assist you in achieving your aim. Nevertheless, with your determination and endless effort I'm sure you'll be able to achieve your sub-4 the next marathon. 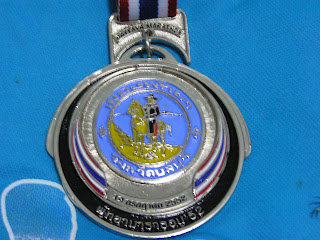 Unlike the eve of SCKLM where I couldn't sleep at all, I slept and rested well last night. I would normally have butterflies in my stomach at the eve of any race and my adrenalin would be so high that I'm unable to sleep. Therefore, having such a sound sleep came as a surprise to me as I was secretly hoping that I could break into Top 10 position in the Men Veteran category in the absence of top runners as a result of various competitions held on the same morning.

Wai Mun and I reached Seremban around 6.10am and quickly kept in touch with Mr Yee who is so kind to help us to register for this race and to collect the BIB numbers on our behalf. Many thanks to you, Mr Yee!

Quickly we did some light stretching and I also "helped" to water a plant (pee!...smile). Some past experiences reminded us that there wouldn't be announcements for the race to start, so we headed to the starting line slightly early.

True enough at 6.45am sharp, the race started. I tried running fast and started to attack from the beginning. Alas, I found my legs were too heavy this morning and my rhythm has gone hay-wire! I tried to keep my composure and suddenly I heard the "beep, beep, beep" sound. The road marshall who was directing the leading pack on the motorbike had apparently made a blunder leading the elite runners to the wrong turn and had to lead them back to the correct path. I could hear a lot of grumbles especially from the elite runners while they jumped over the road divider. The poor African Express who could have easily run an extra km!

Soon, we were led to the new route with long rolling hills. I'm not familiar with Seremban but I think it should be a new highway leading to Paroi. It would be nice and enjoyable to run if I wasn't struggling to find my rhythm at that moment. My legs felt rusty.

My "best friend" finally came when I almost arrived at the first sponging station. "What take you so long?", I whispered. With the second-wind and renewed confidence, I tried to narrow the gap and catch up with whoever who was in front of me even though they might be way, way ahead.

I conquered the hills - quite a few of them. I hydrated myself. I sponged. I inhaled fumes. I ignored traffic. Soon I reached the padang in 1:40:52, still with some energy to spare, no thanks to the last distance marker which indicate - 2km to go, when all we needed to run was only about 500 metres! Misleading.

I came in 16th. in the Men's Veteran category. Mission failed but I wasn't sad as it's just a guideline for a better performance in future races. Congrats to those who finished ahead of me! I reckon that I need to run below 1:36 if I ever dream to achieve Top 10 again.

Wai Mun came in 1:51 for a 11th position. However, she is the 7th Malaysian lady to cross the finishing line, thus won some prize money - enough to cover our expenses for petrol and toll and of course, buy me Seremban siew pau!

Despite some minor hiccups and shortcomings, Seremban HM organiser deserves a pat on their shoulder as they did make an effort to improve in providing adequate water/isotonic drink and sponge stations, shortening prize-collection time and most importantly re-designing 60% of their route which is now more conducive for runners. Thank you, Seremban HM Organiser!

Now, I'm fighting against time to recover for a bigger challenge - another full marathon next weekend.
Posted by John at 5:44 pm 2 comments:

After the SCKLM, suddenly I became curious and wonder how many 42.195kms I have done since I'm into this game. This morning, I quickly compiled and realized that I have completed just 16 marathons and the recent timing in SCKLM2009 was my best so far in Kuala Lumpur, a place I enjoy running the least!

Another finding is that after 10 times of trial and error, I finally get the right marathon training programme that works for me. Perhaps age is also another factor that contributed to a sub-4 performance. What I lack in speed now due to aging, I had to compensate with mental strength - the never-give-up attitude until I cross the finishing line.

Below my humble records:

With my 17th marathon coming soon this 19 July, I'm still uncertain about my approach towards this marathon. Should I go for a lower sub-4 or help my wife and a fellow runner achieve their first ever sub-4 (if they are willing to accept my pacing)? I still don't know. Whatever it is, just wish us luck in Pattaya! Thank you.
Posted by John at 1:20 pm 5 comments:

Analysis:
Result in Entire Field - 140th place
1351 finishers behind. About 9% of finishers ahead.

Opposite Sex
For the record, you were ahead of about 91% of female finishers.

From Halfway to Finish
You passed 64 runners and 5 passed you.

Analysis:
Result in Entire Field - 300th place
1191 finishers behind. About 20% of finishers ahead.

Result in Gender (Female) - 31st place
175 finishers behind. About 15% of finishers ahead.

Opposite Sex
For the record, you were ahead of about 79% of male finishers.

From Halfway to Finish
You passed 163 runners and 9 passed you.
Posted by John at 9:05 am No comments: