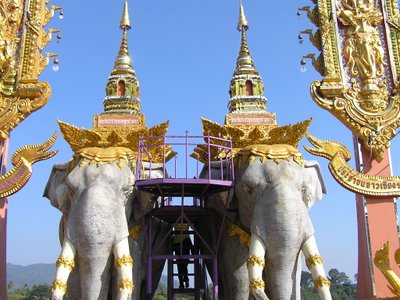 This Chiang Mai Marathon has never been in our running agenda or even holiday destination. As the year is coming to an end, Wai Mun insisted that we go for our annual holiday. She has been ‘dying’ for a break as we have not had one since her sister passed away. So, when I suggested Chiang Mai, she welcomed it without hesitation.

One of the pleasures of running outside Malaysia is that you will not feel under pressure even if you under perform because you are on vacation anyway! It’s been 6 years since we decided to incorporate our holidays with a marathon. Like Wan Yew Leong simply puts it, “killing two birds with one stone!” 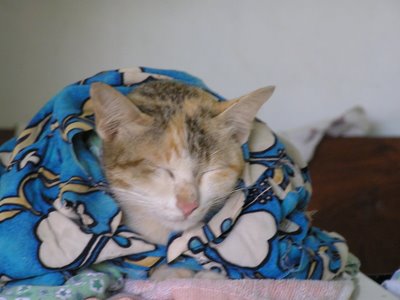 Another pleasant surprise while running overseas is that we are bound to meet a Pacesetter somewhere during the race. I remember when in Honolulu, we bumped onto a Pacesetter in the street, there we stood and chatted in the middle of the street. It was as if, we all have that Pacesetter chop engraved on our foreheads! In Chiang Mai, we met Frenzo, a friend of Alan Tiang and now our friend too. He is a Malaysian working in Chiang Mai. When he heard about our trip, he e-mailed and updated us on the weather condition etc. so that we can prepare ourselves. It was very kind of him.

Well, after my feat in the recent Putrajaya Marathon and still feeling good about it, I registered for another Full Marathon in Chiang Mai. Later, when news got round that we will be doing Chiang Mai Marathon, Yew Chee Chung, Siew Cheng and husband, Mr Lee, Agnes Tee, Lok and their two sons joined in the party!! 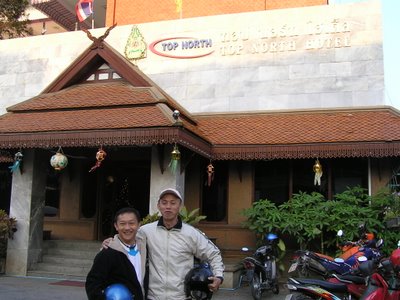 Here’s an account of my race experience in Chiang Mai.

24 December 2006 – I had the privilege to sleep until one hour before the race which started at 4.00am local time. As our hotel was less than 50 metres from the starting point, I took my own sweet time for freshening up and had a simple breakfast. I was relief as I managed to recover from the lack of sleep on Friday night. 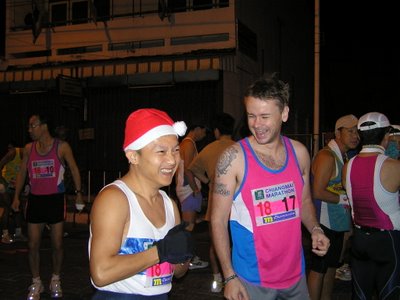 It was quite chilling in the morning. I believed it was around 10 degree Celsius but thank goodness there were no strong breeze. I put on my hand gloves and my Santa Claus cap before walking in the dark and quiet street with my ever supportive wife to the starting point at Thaphae Gate.

The crowd was extremely small. I think it was less than 200 participants running the full distance. Anyway it didn’t bother me much as marathon running is always a test against your own self. The race was flagged off at 4.00am sharp signaling the start of my Santa Claus journey. 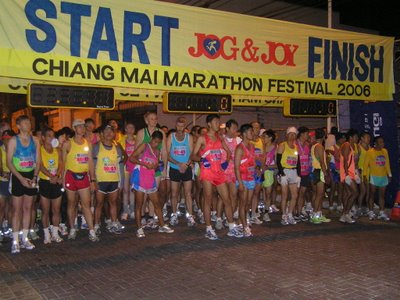 I started very slowly. In fact it was so slow that my watch showed 6’55” at the first km. Gingerly, I increased my pace and tried to break away from the slow group. Then to my amusement, at the 4km mark, there was one lonely guy playing his harmonica to entertain the runners in the cold! Really salute his spirit! I imagined and wondered if Wan Yew Leong would do the same? Hehehe!

The first 5km reminded me of running in the streets of Seremban town where I was surrounded with shops and market. However, unlike running in Malaysia, the organizer made an effort to make sure the runners’ safety comes first by putting up red cones along the route. Kudos to Jog & Joy, a running club similar to our own PACM!

As we adjourned out of the town, I felt much cooler and cooler! This was not good as I recalled I never performed well in cold weather – from my results in Florida and Sydney. Nevertheless, I tried to stay focus and kept telling myself to enjoy the weather and be thankful as I will never be able to run under such cold weather in Malaysia. I reached 10km mark in 54’54”, almost 2 minutes off target!

At my 15km mark, the leading pack was already returning back. Wow! They were fast! I guessed they must now be 8km ahead of me. Checked on my watch and it showed 1:20:50 which meant I am running at a quicker pace of 25’56”.

From 15km onwards, I stopped checking on my split time as the markers were getting confusing. I just ran according to how I felt. Not long after that, we were required to turn left to a housing area where there were no street lights at all! In total darkness, I was careful not to bump into someone in front of me. We had to make a u-turn at a big tree in front of an ancient temple. It reminded me of a Hindustan movie!

I think I was getting faster and faster as I had been overtaking a lot of runners. Motivated, I ran to a stage where there wasn’t a single runner in front of me. Now this is where the problem arises – all of a sudden I wasn’t sure which direction I was supposed to head next as I could see so many arrow signs in Siamese words. Apparently, they were just signs to the hotels or restaurants! Fortunately, a Thai runner caught up with me. I just followed him closely and into a beautiful park where the Royal Flora Expo is being held. Wow! What a pretty scenery and landscape! After another u-turn inside the park, I knew I was heading back to the Chiang Mai town already and I will not lost my way.

I increased my tempo with confidence and quickly grabbed a cup of sport drink (the only water station providing sport drink) and a banana at the 30km mark. Then I saw the 32km marker and checked on my timing – 2:45! I did some mental calculations and I knew I would be able to complete between 3:35 to 3:45. With a PB in sight, I pushed myself during the last 10km. The feeling was really amazing as it was already getting warmer.

With another 500 metres to go, I changed to my top gear and finished strongly in 3:33:08 (Official time 3:33:17)! I managed to cut down another 10 minutes from the previous PB achieved in Putrajaya. I was more than happy when I realized that while I did 55 minutes in my first 10km, my last 10km was a superb 48 minutes!

Now, I can look forward to achieving my ultimate target of 3:30 before I can really feel satisfied and proud of myself! 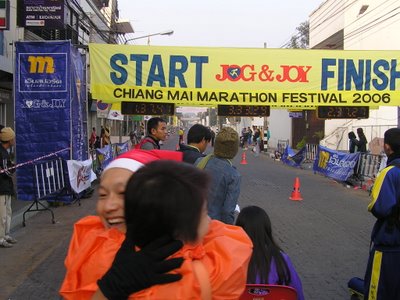 I would say the race was fairly organized and we do not have any complaints. I would recommend it to anyone who needs a short break or value-for-money holiday. We enjoyed the run, the company of friends, the Thai massages, good food, shopping and sightseeing. After all, running is not all about winning the prize money. For us, it is important to give our best, it’s about running a good race, making friends and to be able to keep another happy memory in our album… Sawadee! 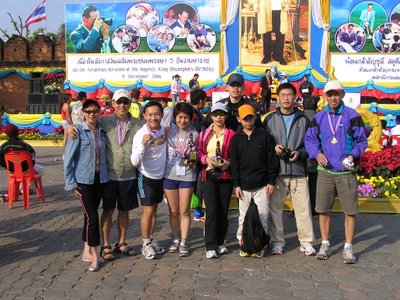 the best photo? it has to be you hugging your wife at the finish line. not many spouses share our joy you know. you're one of the very very lucky ones! happy new year to both of you!

CONGRATS on your timing!

3.30hrs is not damn good,i think it's imaginary for myself to clock such timing.
So elite,so extraordianary

Keep it up John!Well done

Well done! Your marathon results in 2006 is fantastic. Say, aren't you supposed to run slower when you older ? I guess not for you.