5 Dec 2008, Friday.
When we touched down at the Macau International Airport, my first impression was the weather was freezing cold. The wind was strong and I felt like turning back to the plane and head home to Malaysia. At that point, I wondered how I could last running 42km come Sunday's Race Day with minimal clothing on.

Upon checking into the GrandView Hotel, we walked to the Macau Stadium (Taipa) which is situated about 300 metres away to collect our BIB and Timing Chip. We didn't expect much and were pleased to receive so many goodies which included a nice shoulder bag, souvenir programme and marathon magazine. (Later, after the race, we were again given a full-sized beach towel, a good-quality finisher t-shirt and of course a huge medal.) For a mere MOP300 (or RM133) registration fee, I think it's value for money! 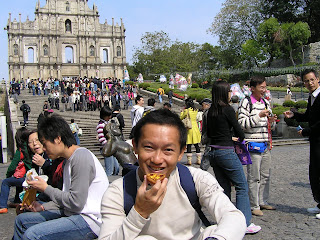 6 Dec 2008, Saturday.
Wai Mun and I basically spent the whole day sight-seeing the world heritage site around The Ruins of St Paul, eating the famous Portugese tarts, shopping for almond cookies and visiting the Macau Tower. Regretably, I didn't do the bungie jump at the Tower as I had wished earlier as the whopping entry fee had my heart jumped off my mouth! 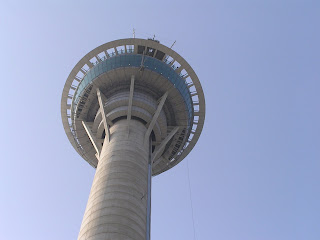 7 Dec 2008, Sunday (Race Day)
I managed to sleep for only two and a half hour. When I got out of the bed at 3am, I felt so legathic. However, I just braved myself and with Wai Mun beside me, we jogged slowly to the stadium. While depositing our luggage, we met some fellow Pacesetters members from KL: Terence Chau, Daniel Tan and the Kuantan Group. Indeed, it's a small world!

With about 20 minutes to go, the stadium gate opened and athletes made a bee-line into the stadium. This is the first time I experienced the Start and Finish of a marathon on the track of a stadium. Wow! I felt like participating in an Olympic event! What's more when I was surrounded by international runners from Macau, Hong Kong, China, Japan, Korea, Australia, Kenya, Ethiopia, Germany, Portugal, UK, USA and many more countries. The race began at 6am. We were blocked by multitude of runners from all categories running the full, half and mini marathon distance! Fortunately, once we "ran" out of the tunnel of the stadium, the crowd started to disperse. The atmosphere was tremendous even though it's a tad pale compared to marathons in the US. Runners were cheered on by groups dressed in Latin, Japanese and circus performers! Cool!

The weather which was my major concern was pretty nice for running. The temperature that morning was 12 degree Celcius with humidity 48%. I didn't sweat much throughout the run. Nevertheless, I still drank at most of the water stations as the air was dry. I got so addicted to the cool weather that I found myself agitated when the breeze stopped blowing especially towards the end of the race when the sun was up. 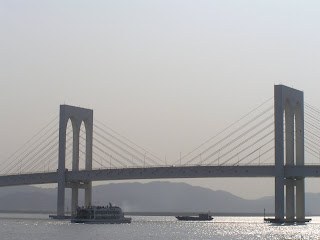 Runners are never far from the sea in the Macau Marathon since it began in 1981. The marathon route we ran is twice the Half Marathon course, which means following the waterfront for much of the way and crossing the spectacular 2.2km Ponte de Sai Van bridge four times. It has always been a run between mainland Macau and the islands of Taipa and Coloane. The course and scenery reminded me of running the Penang Bridge Marathon! Except for the bridge, the course is generally flat with great KM markings and ample of water supplies (what a pity there were no sport drink, banana and power gel provided during the run). Mobile toilets were also adequately prepared, so there was no need to do the business at the bushes! A lot of fun with at least one dedicated road lane at all times, very well staffed and organized. We ran passing some famous hotels eg. MGM Grand, Wynn and the Macau Tower.

Little to no fans to speak of except for near the stadium. Nevertheless, I still had a good time as I was always the centre of attraction and being cheered by the passer-by, road marshalls, volunteers and fellow runners..."Santa, Go! Go! Go!", "Jia Yu, Sheng Tan Lao Ren"....so refreshing and encouraging!

Although I developed a blister and sores around my two armpits during the run, I truly enjoyed my run very much and am looking forward to more marathons to come especially those in the cold weather.

Wai Mun also did well despite her lower tension inguinal ligament strain injury which resulted lack of training. In fact, she made a comeback after a 6-year absence from marathon running. For that, she made an effort to finish in 4:21:33 (Chip Time) or 4:22:26 (Official Time). She ranked 9th in her Category and 368th in Overall. As usual, I'm so proud of her!

Running a full marathon is never easy - with or without injury, pain or no pain...we just got to respect that 42.195km. So, to all those who completed the marathon last week, be it in Singapore, Phuket Triathlon, Cambodia or Macau...just give yourself a pat on the back. We all deserve that, don't we? 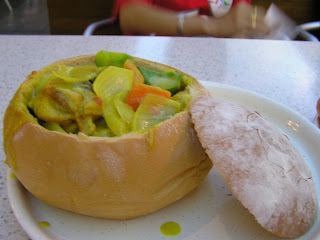 Macau is definitely colder than HK and i shall never miss this next year!
Well done John! Any plans for 3.30 soon?

fuyoh! awesome timing. in fact i hit it 6 times liao - in my sleep. hahahaha!

Dr, you should try it there at least once. I'm sure you can PB again. I always wish to do 3:30. However, at the rate of my training, it will always remain my wish list. sob! sob!

Yip, thanks. You have the ability to do better than this timing. I think you should seriously try it next year as you're a more experienced runner right now.

Carboman, thanks. At least you've dreamt of it...hahaha. Now let's make your dream comes true! You're already very close to a sub-4.

I am from a media company and we are interested in getting you to do some advertorial work for us in your blog. Please drop me an email if you are interested at Mindy.Yu@groupm.com or call me at 27187883

A great holiday and a fantastic marathon!
Going again next year? hehe!
I must go there lah...

Ironman Sofian, this is chicken feet-lah compared to your gruelling IM. Congrats again on your achievement in Busselton.

Tomatoman, I'm sure you will do very well there. At the very least you won't turn to a RED Tomato...hehehe.

wai mun n you are an amazing running couple. an inspiration to many.

Thanks Julie. We are just sharing our stories with our readers. We hope they will add some value in people life - esp. in running and marriage.

And this is nothing compared to your noble contribution to the special children. Keep up your good work!

Must try to run Macau one time liao..cheers !!