Yes, I did it! 2 full marathons within a week! And of course it was by chance rather than a planned one! I did the second marathon in Penang on 24 June 2007 because I felt I have done quite badly in Phuket a week before. It was more of a redemption effort. Even though I did not achieve my target eventually, surprisingly I felt much better and happier after finishing the second marathon. 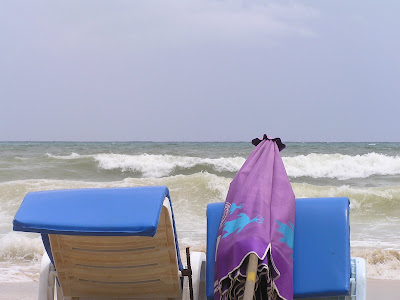 If this race was flagged off at a much earlier time and if it was not for the rain on race day, it would’ve easily justified its tagline as “Run Paradise”!

The start and finish of the race was held at the beautiful Laguna Beach Resort, the exact place of their prestigious annual triathlon event which we could see on TV! On Saturday, we collected our one-piece BIB, the Champion Chip and t-shirt in one of the air-conditioned halls in the resort. All were done efficiently and effectively and within 5 minutes, we got our Race Kits! (Penang Organizers, please take note!)

The race course was a mainly flat out-and-back course on paved roads. Having said that, when it came to hilly part, it could still pose a challenge to a season runner like me! One plus point is that there were distance markers on every km and plenty of toilets with clear signage along the route! (Penang Organiser, please take note!)

Race Day
At 5am local time (6am Malaysian time) sharp, we were flagged off. Gingerly, I stepped on the 50-metre long carpet, feeling like a triathlete more than a marathoner! 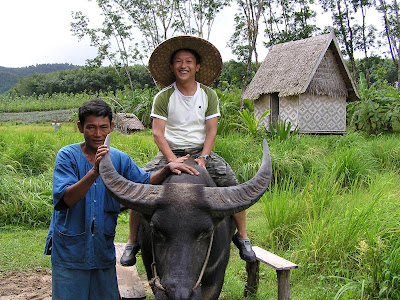 First 10km (my every 5km split as follows: 5km – 27’36”; 10km – 27’13”)
We ran out of the resort into a generally flat kampong road. Although it was still dark, I could see paddy field on both sides, making me feel as though I was back at hometown (I grew up in Alor Setar where paddy field is a norm)! We ran past 2 Siamese temples before heading to a market. Suddenly, I could smell food and felt a bit hungry!! Few monks were seen walking and performing their duties. At this moment I wish Chan WK or Tey ET were there to take a photograph of me running past these monks. It should make a good picture, I think!

Suddenly the tar road turned to a cerment road and we could see more kampong houses.

11km – 15km (27’01”)
The sun began to rise and the day was getting brighter. By now I came across the first “slope”. This is no big deal, Bukit Tunku is tougher, so I thought! Now, we could see rubber trees by the road side. The terrain became undulating but I just ran on confidently. By the 14th km, all of a sudden, I felt the heat on both my cheeks! Wow! How am I going to last this heat for the next 28km? As I was figuring that out, the first runner was on his way back! Bravo! This guy is fast!

16km – 20km (26’18”)
I think God must be kind and without any warning, the skies opened up and poured at 16th km! I guess most runners’ prayers were answered when it rained cats and dogs! My handsome face was badly hit by the rain water and my nicely gelled hair immediately turned flat! Hehehe! I could hardly open my eyes for the next 2km (due to the rain water hitting on my face) and I was worried of any incoming cars hitting on me. Thanks goodness, no vehicles to be seen at that time (or I didn’t see any)! Needlessly to say, my socks and shoes turned wet and heavy. I was worried I would develop blisters as it was my pair of brand new shoes! Oh, my shoes!

Luckily, by the 19th km, the rain subsided. In fact, it drizzled from here onwards until we departed for home. We turned left into a private beach (or was it Sirinat National Park?). I enjoyed this part of the route the most as we were shaded by big trees and free from any vehicles.

At about 20th km, we were required to make a u-turn and step on the red map. I purposely slowed down my pace and stepped on the map. “Beep! Beep! Beep!”, okay, I can be assured that my timing was recorded accordingly! Hehehe!

I was so delighted to see bananas and watermelons at one station. (Penang Organizers, please take note!) It meant a lot to me as I don’t have a habit to carry any power gels during my trainings or in races. I quickly grabbed a banana and did my monkey business. I meant eating it! 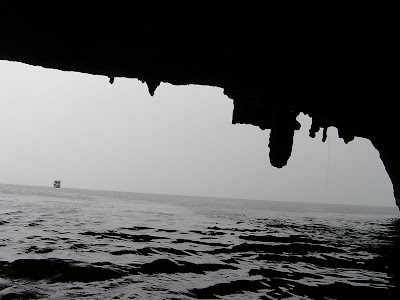 21km – 25km (27’48”)
At 21st km, I was shocked by a lightning and thunder! I was praying hard it doesn’t strike on any of us. By now I was running on the main road where I came from. Ooops, did I say a road? It’s more like a stream now after the heavy downpour. I saw water flowing on the road, flood at some places, landslide and red mud! You name it, now I know these things can happen in even paradise too! Hehehe!

26km – 30km (26’59”)
Back to the undulating terrain and rubber estates. I wished I could do a F1-pit stop to change the rubber of my shoes and stinky socks!

I quickly grabbed a 2nd banana at one station.

36km – 40km (31’12”)
Alas, did I say flat too early? Immediately I got this hot-Wisma Tani-slope to handle! To make the matter worse, we had to cross a construction site where it has an uneven 100-metre stretch full of mud! The workers had already started their day and lorries were plying on the same route as ours! (Hope the Organizer will improve on this in the future runs).

Really “potong steam” at this moment!

41km – 42km (13’21”)
I “jogged” (any name for a pace slower than a jog?) past our resort room and was tempted to turn back and jump into our bed! No grand finishing kicks from me this time round!

Congratulations to my beloved wife for coming in 3rd in her category in the half marathon! 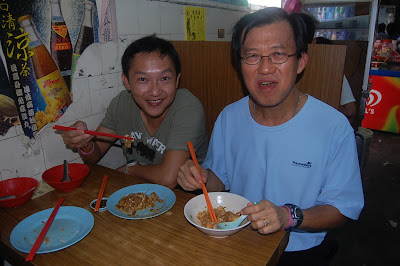 Penang International Bridge Marathon, Malaysia, 24 June 2007
If Phuket tagline is “Run Paradise”, this Penang run should call “Running Into The Past”! Why? It’s because they never learn and improve over the years!

Things are the same as I first started running here 10 years ago. No Champion Chip till now. Colour ribbons were used instead. The amount of chaos at the starting line (especially for half marathoners) and the finishing (for half and full). The lack of isotonic drink. No fruits provided. Almost non-exist toilet facilities. The only thing they have “improved” is that they charged RM1 for the luggage safekeeping! It must be nuts when they expect us runners to bring cash to a race like this!

If not because of my wish to redeem myself after my “disastrous” performance in Phuket, I wouldn’t be bothered to make last minute arrangements for the bus and accommodation services with our PACM to be here!

At 12 midnight, I woke up or rather got up from the bed to prepare myself. There was zero sleeping for me.

I was at the reporting cordon-off area by 2.30am after a saga with the luggage boys and girls!

When the run was flagged off at 3am, I was concern if I would make it to the finishing line without incurring any leg cramps as the weather then was so hot and humid. Luckily as we entered the main bridge, there was a slight breeze which was most welcoming.

Throughout the run, my left hamstring kept sending me signals. Fortunately enough, I managed to complete the run in one piece. To be honest, I thought I had it in me to better the Phuket timing as I did 26’33” for the 1st 5km and 26’11” for the next. However, my pace slowed down gradually without me realizing it! It didn’t help when I pressed the wrong stop button of my watch at 25th km onwards, where I headed into total darkness.

Thank you to PACM for their services and Powerbar team for providing the complimentary power gel.
Posted by John at 5:42 pm

Wah People would usually walk like a duck let alone run just a week after attempting a PR full marathon.But not only you ran,you did 2 sub4 in 2 consecutive weeks and I think that is no small feat. CINYA SALUTE YOU! I think you must be made of GUTS wan.
Félicitation to Wai Mun also for her fine achievement in Phuket.
Bravo!

But the rain is a bit worrying. I ran once in rain..and had a bit blisters.